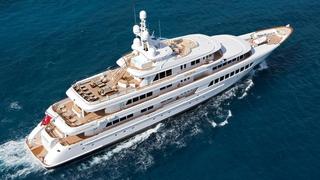 Utopia accommodates 12 guests in three double and two twin staterooms attended to by no less than 17 crew, although a major attraction is her vast range of water toys. She carries two tenders, Waverunners, jet skis, kayaks, sailboats, windsurfers, water skis and snorkelling gear plus a host of inflatables. She is available in Florida and the Caribbean until December 15th and in the South Pacific and Caribbean from January 20th.