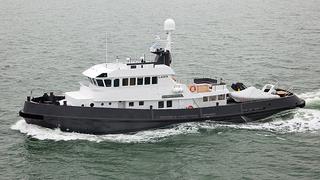 Nick Hardy at classic-charters.com has been appointed central agent for charter of the ice-classed exploration yacht Lars in the Arctic this summer.

Originally conceived as the ultimate sea-going tug, the build was never completed and her hull was purchased by the current owner at the end of 2010 with a view to conversion.

Delivered in February 2012, Lars is now a luxury go-anywhere exploration yacht. Her superstructure has been restyled, a sun deck has been added and she incorporates a swim platform.

Lars has been repowered with a new 1,500hp Caterpillar engine giving a range of 6,420 nautical miles. Bureau Veritas classed and MCA compliant, accommodation is for eight guests in a master stateroom and three guest suites plus up to five crew.

Lars is now on her way to Spitsbergen and will return from her maiden voyage at the end of August. She will be available for private charter in September on the west coast of Greenland and for cruising in Iceland and the Norwegian west coast at rates starting from €65,000 per week.