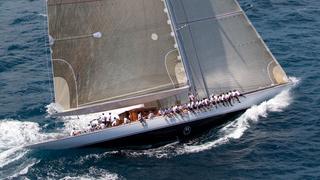 Nikki Gravning at Edmiston & Company tells me that they have been appointed as the central agent for the charter of the stunning 41.55m J Class Ranger.

She was built by Danish Yachts in 2004 as a replica of the J Class yacht which won the America's Cup in 1937, her naval architects Paolo Scanu, Reichel-Pugh and Fred Elliott working with the original lines of William Starling Burgess and Sparkman & Stephens.

A departure from the original, she carries a central cockpit, doghouse and luxurious mahogany interior designed by Glade Johnson, boasting four staterooms aft for owner and guests, with three ensuite baths.

My colleagues at Superyacht Media shot this great video of Ranger at the St Barth's Bucket in 2010, an event which she went on to win.

Ranger is available for charter in the Caribbean this winter with rates starting at $85,000 per week.