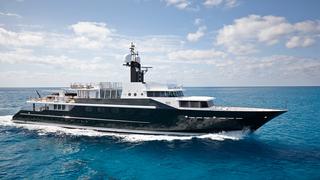 The impressive 49 metre motor yacht Highlander is available at the reduced rate of $210,000 for any 10 day period between the 17th December to 3rd January in St Barths and the British Virgin Islands, offering a saving of almost 25%.

Commissioned by her former owner, the late Malcolm Forbes of the Forbes magazine group, Highlander was built by Dutch yard Feadship and delivered in 1986.

From ElizabethTaylor, Robert De Niro and Harrison Ford to Margaret Thatcher, Ronald Reagan and HRH Prince Charles, the guest list for Highlander reads like a who’s who of the world’s glamorous movie stars and heads of state.

Highlander underwent a major rebuild in 2014 that saw her receive a new Bannenberg & Rowell interior and ultra-modern amenities such as a Jacuzzi tub, a helipad and zero-speed stabilisers to eliminate roll motion. During the rebuild, the designers took the opportunity to convert her major public rooms used for grand dinners and receptions, into smaller, more intimate spaces more conducive towards guest circulation and conversation.

A truly historic yacht, Highlander features seven cabins comfortably accommodating up to 12 guests. The generous guest accommodation consists of a master suite, VIP suite, two doubles, two twins and a single cabin that can be used for a nanny or security. All cabins have en suite bathroom facilities.

Highlander is available for charter through Edmiston & Company.

The Best Party Superyachts for Charter