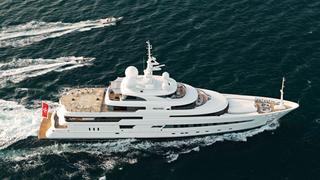 The yacht, which is exclusively available for expedition hire through Edmiston, has been specifically build for world cruising, exploring and research, carrying a wide range of exploration equipment and water toys.

Her main deck features high-tech ocean exploration gear, including a wet lab, video editing suite, extensive dive room and a garage with tenders and a top quality submarine. This is the heart of a boat that is a diver’s dream, the sub’s ‘lockout’ function letting divers to leave and re-enter the sub underwater, allowing a number of dives on one trip. Safety equipment, too is top-of-the-line.

‘We have an inflatable Flexi Deck decompressor,’ says Alexander Flemming, of Pegaso Marine, who was overseer and owners’ rep on the project. ‘If someone had an accident on a regular dive they would forced to risk a fast ascend and the bends. But on Pegaso they could be taken into the submarine, which would be loaded on to the yacht. There, an inflatable flexideck decompression chamber would be attached to the submarine and the person moved into it. The chamber would then be detached from the sub and loaded on to a helicopter to hospital. Because both sub and chamber are pressurised, ‘his body still thinks he’s 50m underwater’, as Flemming puts it.

The theme continues through the boat’s accommodation areas, with the observation lounge spa pool and light, spacious owners’ deck a particular highlight.

For the full feature on this extraordinary vessel, see the July issue of Boat International, on sale 14 June 2012.