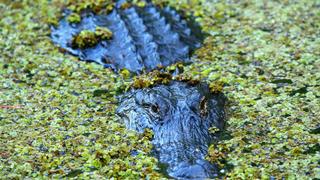 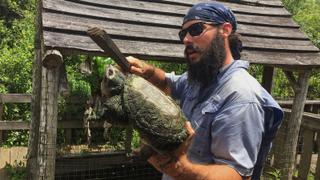 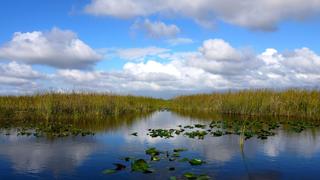 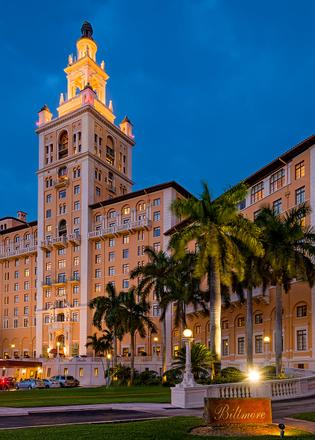 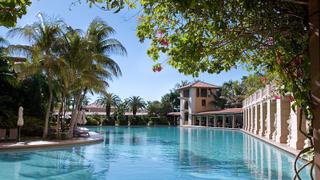 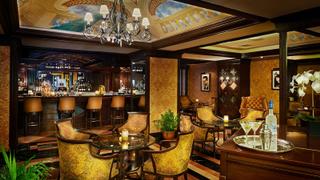 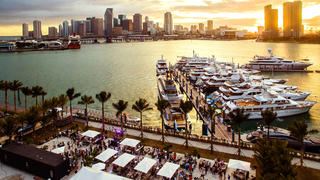 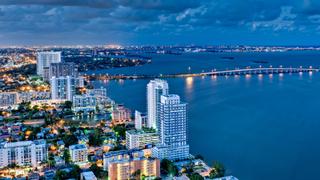 Elizabeth Finney journeys along the extraordinary timeline of Miami, from the archaic Everglades to the creative boom of the 2000s, stopping only to marvel at the iconic Biltmore Hotel

The airboat roars into life and soars over glassy waters, careering over unruly sawgrass marshes while herons take to the skies. Alligators, unperturbed by the noise, bake themselves in the strong Miami sun or loiter beneath the water, beady eyes barely visible on the surface of the Everglades wetlands.

Estimated to be approximately 5,000 years old, the Everglades ecosystem, a UNESCO World Heritage Site, represents an ancient history in Florida. “It’s a very wild region. It is still remote and it is still relatively inaccessible,” says my guide Charles Kropke, CEO of Dragonfly Expeditions. “The Everglades is doing something very interesting. It is reverting back to a wilder place than it has been for a century. For the past 50 years people have been moving out of the Everglades while parks are taking over, so the Everglades is ‘rewilding'".

Aside from the world-famous alligators, the Everglades is home to black bears, panthers, manatees, wading birds, turkeys and a myriad of other creatures. While the original ecosystem is thought to have reached all the way from Orlando to Florida Bay, the Everglades National Park, which was established in December 1947, now stretches across 1.9 million acres.

At the helm of the airboat sits Umberto, complete with bandana, tattoos and beard, he wouldn’t look out of place on stage at Glastonbury Festival. Slowing the airboat, he moors up on a small wooden dock at the heart of the wetlands, where an animal sanctuary sits, almost hidden from view. He picks up a snapper turtle with expert nonchalance, casually explaining how it could easily take off a few fingers before demonstrating this with a wooden stick, which the turtle attacks with gusto.

The nursery is maintained by Johnny Tigertail, who is a prominent member of the Miccosukee Tribe. The majority of the Miccosukees fled West during the American Indian Wars, but approximately 100 managed to evade capture and remained in the Everglades. During our tour, we also visit one of the Miccosukee islands. Sitting on ancient wooden benches we study Indian artefacts and preserved turtle shells as the long grasses sway peacefully around us.

In the centrefold of Miami’s fascinating timeline sits the Biltmore Hotel – an institution and iconic landmark situated at the heart of Coral Gables and as I enter the main lobby, I can see why. Exotic birds relax in cages that are framed by dark wood desks and white marble pillars. A towering ceiling features a colourful Mediterranean tile-inspired mural and contrastingly gothic chandeliers. The sense of historic glamour is present throughout the property and while sipping at a superbly mixed gin Martini, in the elegant Cellar Club Bar, I feel akin to one of the characters that would have played cards and socialised here in the roaring twenties.

While more recent guests include the Obamas and Kim Kardashian, its legendary status as a hub for the stars is rooted in the Jazz Age. From 1926 until the start of World War II, the Biltmore was known for lavish parties, golf tournaments and big band bashes. Ginger Rogers, Judy Garland and Bing Crosby made regular appearances, in addition to President Roosevelt and the Duke and Duchess of Windsor.

Aside from the more wholesome list of guests, legend has it that an infamous gangster used the astonishingly grand two-story Everglades suite as a speakeasy during the prohibition. One of its rooms is often dubbed the Al Capone suite, and it is thought that the hotel may have been involved with the murder of notorious mobster Thomas ‘Fatty’ Walsh in 1929 — though there is no hard evidence of this, filled in bullet holes are still visible in the fireplace.

Roaming the gargantuan hallways transports me straight back to the glitz and glamour of the twenties, but no space is more old school Miami than the stunning courtyard restaurant Fontana. I can picture Judy Garland perched next to the burbling central fountain, with the lush green plants and strings of fairy lights stretching skywards over the heads of her companions. After a sumptuous breakfast of scrambled eggs, fresh fruit and yoghurt, I head to the vast 2,136 square metre pool. Surrounded by Grecian statues, it was once hosted some of the most prestigious swimming galas of the 1930s and was also where the hunky Johnny Weissmuller, who later played the leading role in 12 Tarzan movies, worked as a swimming instructor.

Despite modern amenities such as the gym and spa, the well-maintained American Art Deco elements help retain a type of grandeur that makes you feel like a part of the hotel’s history. One of the most opulent spots in the hotel is the Palme d’Or, which is bedecked with mirrors, vintage photographs and warm sconce lighting. Caviar appears topped with gold leaf before creamy le crabe royal d’Alaska, which is decorated with bright edible flowers. A buttery Japanese Kobe beef tenderloin follows and afterwards, La Fôret Noire. The Biltmore has added a twist to this typical 1920s favourite, which involves a solid chocolate tree topped with pink candyfloss reaching out of a delicious cake base.

Miami was an exciting place to be in the 1920s and 1930s. Perhaps it has something to do with the fact that Miami is the only major American city founded by women, but it has always been a hotbed of creative evolution, the most prolific of which was the Art Deco movement. “Miami Beach has the largest collection of Art Deco architecture on the planet,” says Charles. “There are more than 800 buildings that were built in the style during the big Art Deco movement.”

The historical love of art in Miami has been fuelled throughout recent history but has excelled in the last decade. In 2002, the world-famous Art Basel event established a second permanent location at Miami Beach. From that point the art scene exploded. In 2013 the Center for Fine Arts moved location and evolved into the Pérez Art Museum Miami (PAMM) in addition to the numerous galleries and museums that sprung up, while the Institute of Contemporary Art (ICA) is currently being moved to a brand-new location.

In recent years, an increasing number of superyacht marinas have been built to cater for Art Basel and the myriad of other festivals that take place throughout the year. In 2016 alone, both the Island Gardens Deep Harbour (max. LOA is 152 metres), and One Island Park (max. LOA is 244 metres) opened to welcome superyachts to Miami.

The chic and modern Miami Beach scene seems worlds away from the ancient marshes of the Everglades and from the razzle-dazzle of the Biltmore, but they are all intrinsically linked by more than just their location. We visit the gallery of iconic nature photographer Clyde Butcher, which is located on the fringes of the Everglades. The enormous and detailed prints capture the wetlands in traditional black and white, highlighting the extraordinary otherworldly nature of the place. Butcher’s work both complements and contrasts with the splash of contemporary colour that takes over Miami Beach each December at Art Basel, but it proves that fine art can be found in nature. The Biltmore's collaboration with Dragonfly Expeditions means guests can experience the best of both — art connoisseurs can make the most of the custom Art Basel tours while nature fans can delve into the depths of the Everglades.

“Cities aren’t like people; they live on and on, even though their reason for being where they are has gone downriver and out to sea,” American novelist John Updike once said. Florida is a fast-paced, exciting and ever-changing place with a powerful history. Arguably, the evolution of a city can often be measured by the progress of technology and culture alongside the unfortunate demise of its natural environment. However, looking at the Everglades’ comeback alongside the city’s art revival, if there were ever an example of a place where evolution is balanced between nature and the metropolis, it would be Miami.