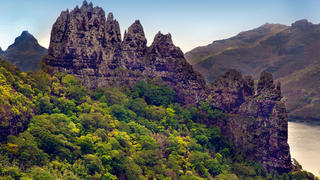 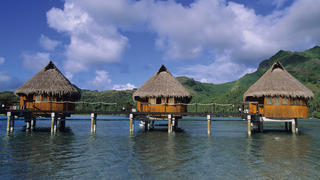 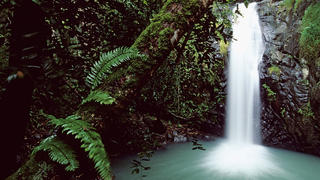 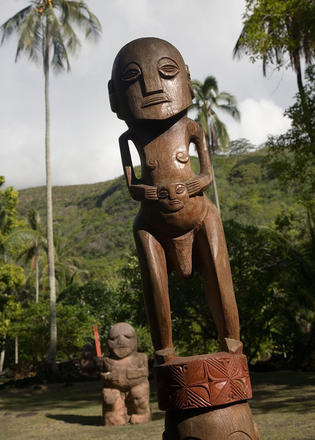 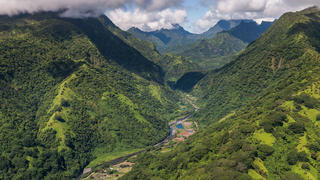 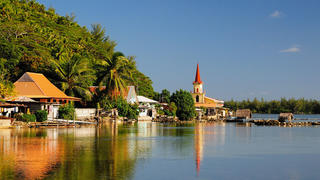 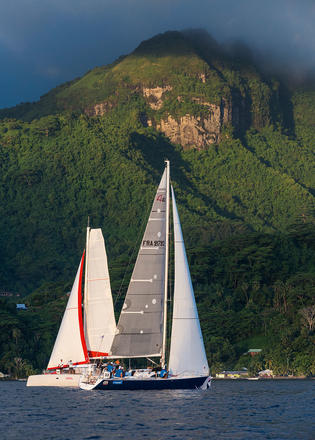 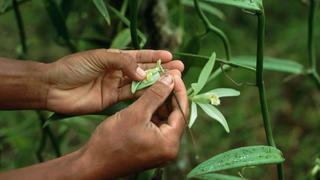 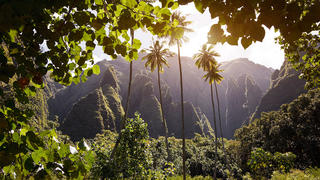 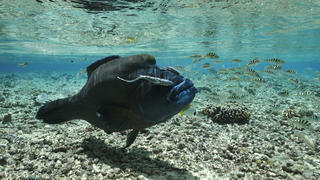 Perched on a spreader, laden with camera gear, atop the rig of a catamaran, I watch as the fleet competing in the Tahiti Pearl Regatta snakes along the inner fringes of the reef that encircles the island of Tahaa. In the distance, the distinctive twin peaks of Bora Bora loom in the haze while, below, a scattering of grass-roofed huts on stilts tiptoe from their sandy islets to sit just above the cobalt waters.

In spite of my precarious position in the rigging, it’s hard to imagine a better viewing point to take in the spectacular beauty of the Society Islands. This is the main island group in Tahiti – as this region is often referred to – which includes Tahiti itself, along with Raiatea, Huahine, Tahaa, Moorea and Bora Bora, among others. To the north and east is the Tuamotu Archipelago, with the Gambier Islands at the south-eastern end. To the south of Tahiti are the Austral Islands, while 500 miles to the north east are the outlying Marquesas Islands.

Pape’ete, the capital of Tahiti, clings to the northwest corner of the island, bustling with life and hinting at a variety of cultural influences, from the Tahitians to the French, Chinese and other settlers who have made this island paradise their home. Snaking along the west coast, past the international airport, a cluster of high-end hotels look out at Moorea, while the lush interior of the island offers instant escape into jungle-sided mountains bursting with fascinating flora and fauna. On a half-day 4x4 adventure with Marama Tours, my enthusiastic guide, Maco Haapuea, had given me a crash course in not only the geography of the islands but also Tahitian traditions and even the language. It’s positively poetic. Each island’s name resembles something of significance. “Moorea translates as ‘yellow lizard’,” Haapuea enthused. “Pape’ete means ‘basket of water’ and Raiatea means ‘far sky’.”

As we wound our way ever deeper, towards the centre of the island, Haapuea would stop suddenly to pick flowers that tasted of raw mushroom or demonstrate the resonant, booming qualities of the mape – or Tahitian chestnut tree – by hitting the trunk with a rock, a traditional method of communicating in the narrow valleys. Slender waterfalls plummeting over rocky ledges feed the valley river, and what better way could there be to escape the humidity than stopping for a refreshing dip in the river’s rapids before hiking up to a sacred marae (temple).

The “far sky” of Raiatea, the second largest Society Island and a quick hop by yacht from Tahiti, is the starting point of the Pearl Regatta, which takes place in May (2-7 May, 2016), drawing a vibrant mix of competitors and yachts, some local and many who are passing through on their great Pacific adventure — just one of the many reasons to discover French Polynesia on a superyacht. From liveaboards and cruising catamarans to the more serious raceboats, the competition on the water can be as intense as the partying afterwards. Some of the racing – for example, the round Tahaa race – takes place within the confines of the atolls, with the yachts skirting the striking azure shallows to capture the best wind.

Raiatea has become the epicentre of yachting in Tahiti and deservedly so. The island is believed to be the start point of the great Polynesian migration, when the islanders made the epic journey across the Pacific as far as Hawaii and New Zealand in double-hulled sailing canoes. The main small yacht charter companies are based here and the sleepy harbour village of Uturoa serves as the hub – it’s the host marina for the regatta. Lively bars and restaurants, such as La Cubana, offer simple menus and ice-cold beer.

Nearby Tahaa island, just to the north, is an altogether quieter affair, famous for its vanilla. Tahaa’s secrets are the idyllic palm-fringed motus – small, sandy islets within the protection of the reefs that just beg for impromptu picnics and barbecues, while the island of Huahine – a destination on the regatta as a two-legged passage race from Raiatea with an overnight stop – surprises at every turn. Less visited than its nearby sisters, this lush, organic idyll is a hidden gem, often cited by those with local knowledge as their favourite of all the Society Islands.

The regatta and its attendant social scene offer more than enough thrills and spills for those exploring French Polynesia on a luxury yacht, but the action under the water is just as spectacular, as I discover on a flash dive excursion off the InterContinental hotel, south of Pape’ete, with Top Dive. Inside the reef, a wreck, a light aircraft, plentiful coral and colourful fish give a taste of what this Pacific paradise has to offer. But the real treats for divers are more remote – in true superyacht territory. Out in the Tuamotu, 200 miles north east of Tahiti in the atolls of Rangiroa and Fakarava, are some of the best dive sites on the planet. Dives are shallow, usually around 20-25 metres, and it is not unusual to find several hundred sharks stacked one above the other as the tidal stream flows through the atolls’ narrow passes. “The incoming tides create perfect drift conditions,” says Gavin Bladen, captain of the 45 metre catamaran Hemisphere, which spent more than a year based in Tahiti for owner cruises and on charter. “Fakarava’s South Pass gives you the opportunity to cruise with 300-plus six to seven-foot grey reef sharks as well as other species such as black tips, white tips and black fin sharks.”

For superyacht guests seeking sophisticated relaxation the Society Islands deliver shorebound comforts in spades. There are a number of must visit spots in French Polynesia — in Tahiti itself, the French influence is evident in the restaurants, which often feature French Polynesian fusion cuisine with fresh ingredients imported from Europe. Notable restaurants include Le Lotus at the InterContinental, Le Carré at Le Méridien, Le Coco’s – frequently voted top dog and which now has a similarly rated sister restaurant on Moorea – or L’O à la Bouche in Pape’ete. Out on the western fringes of the archipelago, the dramatic skyline and the lagoon of Bora Bora offer the exquisite La Villa Mahana or, for something a little more lively, Bloody Mary’s. “Bora Bora is beautiful,” says Bladen. “Hemisphere’s favourite anchorage there is to the west of Toopua Island.”

While the Society Islands and the Tuamotu are what many consider classic Tahiti, there is another, more distant wing. The Marquesas are often omitted from cruising itineraries but those who have been there think this is a mistake. “I preferred the Marquesas to the Galápagos Islands,” says Barry Houghton, who has cruised his yacht, Salperton IV, extensively in the Pacific. “The islands are stunning and there are so few people there. I remember we went off on quad bikes with this crazy, pot-smoking Frenchman who took us to places you wouldn’t believe.”

The rocky peaks, cliffs, deep bays and steep valleys of the Marquesas are a far cry from the atolls of the Society and Tuamotu islands, but this dramatic landscape can be the perfect foil to the archetypal Pacific paradise. “On Hiva Oa – the final resting place of Gauguin – you can find statues like the Moai found on Easter Island,” says Houghton.

This remote Pacific nirvana, then, seems to have it all – whether you are looking for the rugged isolation of the Marquesas, the remote idylls and diving epicentres of the Tuamotus or the luxurious comforts and palm-fringed sands of the Society Islands. “Who wouldn’t want to ditch the overcrowded destinations in the Med or the Caribbean for their own Pacific adventure?” says Bladen. “The Tahitian language doesn’t have a word meaning ‘goodbye’ so they say ‘see you later’. I guess they know once you’ve been, you will return.” From my vantage point high up in the rigging, it’s hard to disagree.

For more information on the islands of Tahiti, visit tahiti-tourisme.co.uk; Le Méridien Tahiti offers rooms from £150, lemeridientahiti.com; Air Tahiti Nui is the national carrier to French Polynesia with flights from Paris, Los Angeles, Tokyo and Auckland to Tahiti, with connecting flights from London with Virgin Atlantic, airtahitinui.com

The top 6 places to spend Christmas 2017 on your superyacht