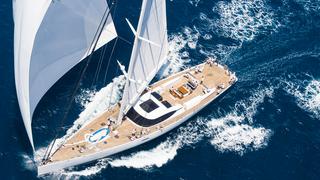 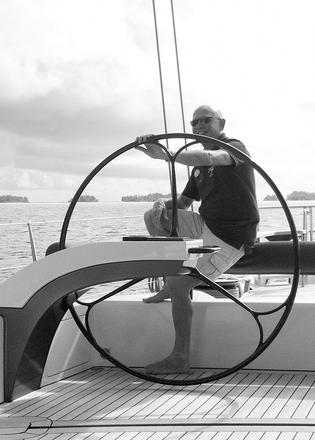 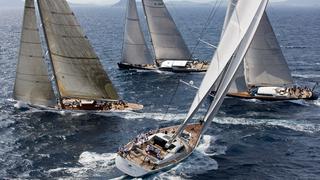 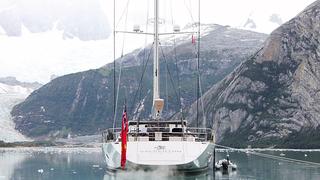 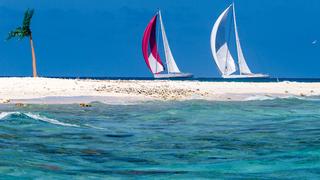 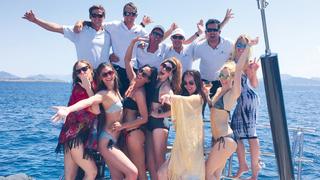 On board with Barry Houghton, owner of sailing yacht Salperton IV

As a self-made man, Barry Houghton was always destined to go places. We sit aboard his current yacht – the 45 metre sailing yacht Salperton IV – as he flicks through albums of his adventures on his iPad. A photo of him holding the Loro Piana Superyacht Regatta trophy is quickly followed by a selfie, taken atop a rocky ridge in Chilean Patagonia. Then there’s the IT girls mixing with his crew on the aft deck, and then a shot of Salperton - currently listed for sale - gliding past the reef of a Tahitian atoll under full sail. It is an enlightening journey of stark contrasts, from intense competition to remote cruising. It’s both inspirational and aspirational and – as fate would have it – not a million miles from Houghton’s own story.

Born in northern England, Houghton enjoyed a happy childhood and family life. “We didn’t have a lot of money,” he begins, “but we did have a lot of enjoyment.” Educated at the local grammar school, there was every chance that he would follow his father into the Pilkington glass factory that was one of the major employers in his home town of St Helens. Houghton, however, had other ideas.

It would be another 30 years before Houghton got his first yacht, but the inspiration came much earlier. “When I’d finished my A-levels,” he says, “I hitchhiked to the South of France and got a job as crew aboard the yacht Malahne. We had to sleep in hammocks!” It was a busy season for the yacht, which took in Portofino, Elba, Ercole, Capri, Ischia, Sicily, the Ionian, Croatia and Venice. “It was an amazing experience. And it wasn’t just being on the water, it was a discovery. To see those places was fantastic. When I got back to Monaco I bought a ticket home to the UK to see a girlfriend. If I hadn’t, I would probably still be working on yachts. It’s probably just as well I did come back. I think I have quite a bit of ambition in me, and it gave me the drive to want a boat of my own.”

On his return to the UK, Houghton did a couple of jobs before joining a large industrial outfit, based in London. “I worked in the sales and marketing division for a company called Alcan Aluminium, having got on one of their special training courses,” he says. This was good training but Houghton saw an opportunity and went into business, aged 21, with just £1,500, getting married a year later. He started by supplying mechanical components to the telecoms industry but quickly switched his focus to the manufacture of base transmission stations.

“I did that for 28 years,” he explains. “I always said I would quit at 50. And I did. It was 24/7 and I was never at ease. I was completely burnt out when I stopped.” After two private equity investments, a London Stock Exchange listing and then a New York Stock Exchange one too, Houghton’s company received a substantial offer just before he turned 50, and so he sold out.

He moved to Switzerland but within three months was bored. “I started to promote and develop high-end property in Switzerland,” he continues, “and I said to myself that I would never again have an operational business. I wanted to work but I wanted to control my time.”

This successful business background has not only allowed Houghton to fulfil that young dream of owning yachts, but has had a direct influence on the process of designing, building and running them. “It’s not just a case of enjoying them,” he says. “I run my own boats through my own private office. I’ve owned four yachts, three of which I built. I think that having been in the manufacturing industry has given me good experience.”

Houghton bought his first yacht – a Perini Navi – in 1998, but the next year he had already started designing his second, with Ed Dubois and Malcolm McKeon. “I wanted something different to the Perini,” Houghton smiles, “something elegant, not too top heavy, with a good hull and a good sailplan.”

The result was a 53 metre ketch, and in 2000 Houghton signed a contract for the build with Alloy Yachts in New Zealand. Now cruising under the name Drumbeat, Salperton II was a significant vessel when she was launched. “She was the biggest boat that Alloy Yachts – and New Zealand for that matter – had built at the time,” Houghton says. “She was even featured on a postage stamp!”

Quickly, though, came the realisation that she wasn’t quite what Houghton was looking for. “I sold her as she was too big for me,” he explains. “The flybridge was too far from the water and you don’t get the real feeling of sailing. I sold her well,” he adds with a smile, “and decided to go for something in the 40 to 45 metre range.”

Once again turning to Dubois for the design, the result was the 44 metre Salperton III (now Artemis), which this time was built at Fitzroy Yachts in New Zealand. “Immediately before I took delivery, I ordered another as I could see things that I could improve,” he says. “Unfortunately I lost money but it was the right decision.”

He took delivery of his fourth and current yacht – the 45 metre Salperton IV, also built at Fitzroy to a Dubois design – in June 2009, with plans that included not only extensive cruising in the Pacific, but also something more adrenalin-fuelled. Houghton had taken part in the 2003 St Barths Bucket on Salperton II and had quickly acquired a taste for the developing big boat racing circuit, so immediately after Salperton IV was delivered, he launched straight into the regatta season.

“I had raced on a few Js,” he says, “and had seen their crews. I thought I needed a proper helm and I liked the idea of having a woman.” He engaged the services of British Olympic gold medallist Shirley Robertson, a successful collaboration that lasted several years. “Then I added [New Zealand sailing star] Cameron Appleton. My race crew comprised the six core crew of Salperton, with 10 additional paid crew and around 10 industry professionals.”

But in 2010 at the Loro Piana Superyacht Regatta in Sardinia, everything changed. Houghton recalls the fateful day: “Mark Goodwin, my first mate, had been with me for several years,” he says. “We were in what is known as Bomb Alley and it was blowing hard. It was just the one occasion when the jib sheet broke. The lazy sheet picked him up and threw him against the mast, smashing eight ribs, his collarbone, puncturing his lung, and splitting his liver and spleen. Fortunately we had an ex-Volvo medical guy on board who was a level above. We got back to the Yacht Club Costa Smeralda, and Mark was transferred to Olbia, where they operated on him, removing his spleen. He was too badly injured to be evacuated out by air.”

Shaken by the experience, Houghton realised that superyacht racing was starting to push the boundaries of what was safe for such large vessels being sailed hard in close quarters. “I’d said I don’t want to race hard on the wind in more than 25 knots of wind,” Houghton continues, “and I still have that rule today. But the accident led me to start the SuperYacht Racing Association (SYRA). I remember doing a Rolex Maxi Worlds and ending up with five yachts just metres apart. These things are 250 to 300 tons, and they’re just not built for it. So the SYRA was founded with several key factors in mind: safety, proximity, turning points. There was a good take-up among other owners immediately. Race officer Peter Craig was great, as was Edoardo Recchi, of the YCCS, and [regatta organiser] Kate Branagh.”

With SYRA’s influence, the International Sailing Federation (ISAF) added a superyacht appendix to the official rules of racing, a key point of which was the addition of the 40-metre “exclusion zone” around each yacht on the race course.

Disaster would also strike in 2011, although this time thankfully no one would be injured. As Salperton was sailing in light airs off Guadeloupe under main and staysail blade, the mast suddenly broke six metres above the deck. An investigation found the cause to be faulty carbon but the mast and rigging was largely lost to the depths.

A couple of years later, after a highly successful regatta season that earned him top spot in both Loro Piana events as well as the class win in St Barths, a second at the Palma Superyacht Cup and a first at the Dubois Cup, Houghton would pull back from competition. His decision, however, was less to do with falling out of love with racing and more the fact that, once again, he was going places. “We knew that we were going to continue on after the Caribbean season of 2013-14. We sailed down to San Blas and Colombia, then went through the Panama Canal.”

His epic trip took him from Panama to the Galápagos, then the Marquesas, Tahiti, Tonga, Fiji, and through to New Zealand, before the yacht sailed back through the Southern Ocean to the tip of South America to meet Houghton, who had flown out to Patagonia two weeks earlier to indulge his love of hiking and climbing. “There were so many amazing places,” he enthuses. “The Marquesas were better than the Galápagos, and I love the Yasawas in Fiji. We visited a school there; the schoolmistress was amazing, and the kids were so happy. I was so pleased that I was in a position to help them with a donation for new school equipment. In Tahiti, I met up with the artist who had painted the picture that hangs in Salperton’s saloon. He had never seen it on the boat, so I was able to get him on board to see it in place. In Tonga, we rented the king’s summer palace, which is essentially a hut with a very big balcony over the water, while the Darwin Glacier and the Beagle Channel in Tierra del Fuego were simply amazing.” Salperton continued to the Falkland Islands and then Brazil, before heading back across the Atlantic to the Med.

Even now, Houghton refuses to stand still. Dividing his time between homes in Switzerland and Mallorca, he still gets out on the water as often as possible, either cruising Salperton or enjoying his other toy – a Sunseeker Superhawk – around the Balearics. I am surprised, then, to learn that Salperton – with her impeccable cruising record and undeniable racing pedigree – is currently listed for sale with Stockbridge Yacht Brokers. “I have plans,” concludes Houghton. “I’d like to build a 47 metre yacht, but I won’t start the construction until I’ve sold Salperton. And what I’ll do this time is get the spec right, then rent a factory and build a full size mock-up in plywood to try out the interior layout. I would recommend that method to anyone thinking of building their own yacht.”