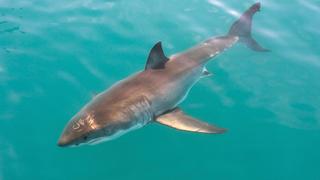 Drones are the latest tool to be used to try and prevent shark attacks in Australia. A trial in New South Wales (NSW) will see drones fly over the water and feed back images to operators, with GPS coordinates, so that beach goers can be warned.

The move comes after a spate of high-profile attacks, including one fatality, over the past 12 months. The new technology will be used in conjunction with the current shark management strategy, which includes the use of barriers and helicopter surveillance.

"There is no easy way to reduce risks for swimmers and surfers," NSW minister for primary industries Niall Blair, said in a statement. "We are delivering on a commitment to test the best science available, including new technologies, as we try to find a long term-term solution to keep our beaches safe.”

As well as using drones NSW is also going to trial a “smart” drum line near Ballina. The line will immediately alert authorities if a shark is hooked so that it can then be tagged and released. The technology is meant to be more humane the controversial drum lines that were used capture sharks in Western Australia in 2014

NSW government minister, Niall Blair, said: "They're like a baited hook that has technology connected to it so when the bait is taken, a message is sent to our vessels and they'll attend those lines immediately.

"They will then tag and release the sharks that are caught on those. So they're very different to the traditional drum lines which could have sharks sitting on them for days before they're checked."

Earlier this year incredible footage of champion surfer Mick Fanning escaping a shark attack went viral and sparked an interest in the issue. However despite raised concerns and several terrifying shark attacks on boats, an American study has claimed that the risk of shark attacks has actually plummeted since the 1950s.

Video: six of the most terrifying shark attacks caught on camera