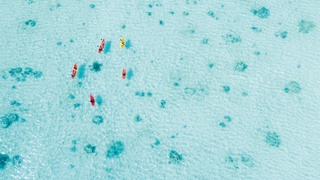 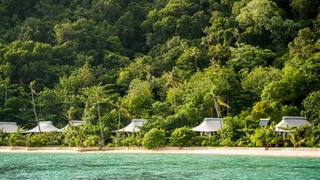 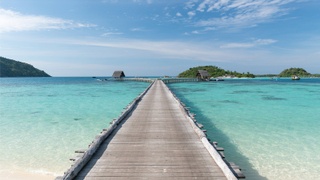 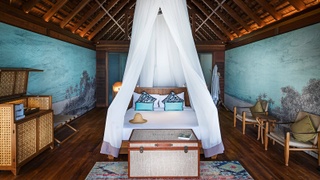 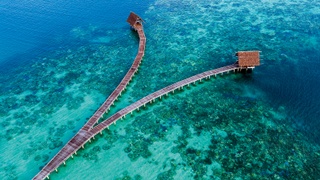 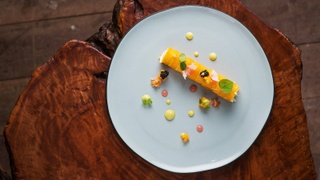 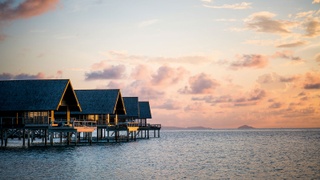 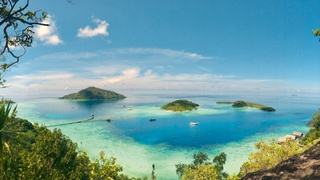 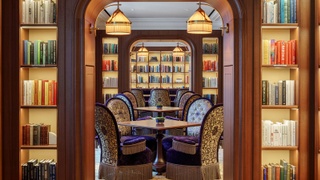 An undeveloped archipelago in the middle of the South China Sea, the Anambas Islands are as fragile as they are wildly beautiful. Sophia Wilson finds an eco-minded retreat determined to secure its future

The day is breaking over the ocean horizon and a kaleidoscope of colours, from burnt orange to rose pink, glow in the smattering of cotton wool clouds. My kayak paddle splashes through the tranquil water as I navigate towards a pristine atoll, home to a tuft of emerald forest and a pale sand beach where the sole inhabitants are scuttling hermit crabs. As the sun warms my back, I have the stark realisation that if I were presented with a map I would have no idea where to mark myself in the blue expanse of the South China Sea.

To be fair to my geographical skills, it’s safe to say the Anambas Islands, which are more than 160 nautical miles north-east of Singapore and halfway between the Malay Peninsula and Borneo, are little known. The giant lizards of Komodo and the dive sites of Raja Ampat may be familiar stop-offs for luxury adventurers and superyacht visitors to Indonesia, but this archipelago has somehow slipped under the radar. However, the Bawah Reserve – a six-island, three-lagoon and 35-suite eco-focused retreat – could be about to change this.

The resort is primarily the vision of Singapore-based investor Tim Hartnoll, who travelled by boat to discover this cluster of islands that were once at risk of destruction by illegal dynamite fishing. “Pulau Bawah had always been on the chart during our sailing trips,” Hartnoll says, “and those familiar with the area had encouraged me to visit, but nothing could have prepared me for when I did. “It’s unique: the intense green of the jungle, which rises over 150 metres, and the aquamarine of the lagoon contrasting with the lighter colour of the reef. From the moment I discovered Bawah I couldn’t get it out of my mind.”

Hartnoll and a group of shareholders were given the opportunity to develop the reserve and, in 2013, construction began. “It was important to me that we followed a sustainable plan,” Hartnoll explains. “One of the first things I did was make it a marine reserve, banning fishing in the surrounding area to prevent any damage to coral and marine life. The build took over five years because we did not use any heavy machinery – hand and local techniques only to avoid any unnecessary damage to the land.”

Bawah has garnered plenty of attention from eco-minded travellers since it opened in July 2017. Visitors are cocooned in comfort, but its green credentials are still first and foremost: plastic bottles are banned, guests are given reef-friendly sunscreen, water is heated using solar energy and the whole operation runs a zero-waste programme.

Natural beauty intact, Bawah Resort can also act as a luxurious anchorage for superyachts wanting to explore this wild archipelago – only 10 per cent of its 250 islands are inhabited. “So far the Anambas have been off the charter radar but they have great snorkelling, diving, beautiful beaches and plenty of anchorages,” says Nikko Karki, of charter company Indo Yachts. At roughly a 10-hour steam from Singapore, which makes a great stop-off en route (see bottom of page), the Anambas are actually more accessible than some of Indonesia’s better-known cruising grounds. “The fact that Singapore already has a developed marina infrastructure means that yacht owners can keep their boats berthed and then cruise over to the Anambas,” says Karki. “It represents a kind of boating that’s much more like what we have in South Florida, the Caribbean and the Mediterranean.”

If you don’t have the option of arriving by yacht, getting to Bawah is a slightly convoluted affair. From Singapore, a 60-minute ferry ride takes you to the Indonesian city of Batam, where you are fast-tracked through immigration. It’s then a 20-minute drive to the airport where an amphibious aircraft takes you on the 90-minute flight to the reserve. It is possible to hire a private plane from Singapore (a stop-off in Batam is still necessary for immigration and customs) but the journey is undeniably a part of Bawah’s charm. Seeing the jade islands dotted on the horizon before landing on the turquoise waters in front of the overwater villas and banana-skin-shaped jetty is a spine-tingling and rewarding experience, which also helps to dictate its clientele. “When the accessibility is harder you get a different kind of guest. You get more of an explorer or adventurous type,” says Paul Robinson, Bawah’s chief operating officer.

The beauty of a resort comprising six islands, rather than a single private island, is that it has plenty to keep these adventurous types entertained. Its house reef is spectacular, with the coral and marine life thriving from its protected status. There is an army of spa therapists available to give the daily included treatments in its thatched pavilion spa or in a cabana set up on the adjacent atoll (which you can reach via a curving spit of sand during low tide). Its 13 beaches are regularly put to use for picnics, and fitness and wellness guru Lisa Jones is on hand to help twist and stretch guests into shape.

Days quickly blur into each other, the activities interspersed with leisurely lunches – fresh tuna poke and rosé is a favourite – in a swing chair with my feet in the sand at the casual Boat House. After the sun sets (Bawah literally runs on its own time: it chooses to align itself with Singapore’s time zone rather than Indonesia’s to give islanders a later sunset), films are screened on the same patch of sand. Or you can eat under a canopy of colour-changing lanterns that look like jellyfish tentacles at the elevated Treetops, which serves a mixture of local specialities, including fragrant seafood laksa with tempura prawns, and more Western-style dishes. I would happily swim back to Bawah for another serving of its chocolate and chilli pudding.

In short, Bawah is paradise, but it is still plagued by one of the biggest threats to the ocean: plastic waste. Every time I head out on one of the reserve’s boats we spot a floating bottle or detergent packaging. The ever-smiling staff diligently stop to pick up any plastic waste but it is an uphill struggle for Bawah and the wider area. “We have to clear up every single day and often several times a day,” says Robinson. “Where it comes from depends on the tide and time of year. Today we had a bottle from Malaysia, sometimes it is from Korea or from Vietnam, but predominantly it’s from Indonesia.” The situation has improved beyond recognition since Bawah’s transformation – tonnes of plastic waste had to be removed before construction began – but the Bawah Anambas Foundation (an independent body established with the support of Bawah Reserve in 2018) is determined to do more. “We may only be a tiny little 35-suite hotel but we can help educate our staff to become ambassadors for the future,” says Robinson. Through the foundation staff are taught about the dangers of plastic waste and also encouraged to spread the word by introducing recycling bins and other initiatives into their communities.

To mark the end of my time at Bawah (and in an effort to burn off the chocolate pudding) I awake before sunrise to hike up into the reserve’s forested canopy. There are three well-signposted trails that lead through the gnarled trees and tropical undergrowth to a trio of spectacular lookout points. After a 30-minute ascent I stand on the cliff edge with panoramic views over the scattering of surrounding islands. It is here that I truly get the perspective of what makes Bawah unique: it’s so rare to see the forest touch the sea.

Watching the sun rise over this secret Eden I am relieved that its guardians are working to ensure it remains unspoiled for future generations to experience. Echoing the sentiment of Tim Hartnoll, nothing can prepare you for the beauty of Bawah – and perhaps by him putting it on the map, this petite archipelago can offer the Anambas a sustainable future.

When talking about environmentally conscious development it is easy to focus on new builds, such as the Bawah Reserve, but restoration can be equally important. Set in a row of striking “shophouses” built in 1929 in Singapore’s Chinatown, the Six Senses Maxwell, which opened in December, is an admirable demonstration of the importance of renovation.

Behind its traditional art deco façade, complete with the original lion-head rain spouts, lies a sumptuous interior with hand-woven silk rugs, hardwood floors and burgundy velvet upholstery. Once 14 houses, it has been transformed into 138 guest rooms and suites without changing the existing structure of the building. Instead, French designer Jacques Garcia worked with the quirky spaces to create rooms finished with individual artwork, tasselled velvet chairs and organic bed linen.

Six Senses’ second property in Singapore – its Duxton sibling is just a short stroll away – also comes with plenty of personal touches. Jet-lagged travellers are left Alice in Wonderland-style potion bottles containing a concoction of snow chrysanthemum, globe amaranth and lavender to aid sleep and gifts of Po Chai Pills and Tiger Balm are left in the bathroom.

The brand’s environmental ethos is also maintained throughout the property with water served from reusable glass bottles, a commitment to sourcing ingredients nearby (its tasty minibar snacks are all made in the local community) and green bathroom amenities, including a biodegradable toothbrush made from corn starch.

7 of the best real life treasure islands to explore

The Lost World: How Langkawi is luring superyachts to Malaysia

Six go sailing: A family adventure on board Dunia Baru

7 of the best luxury spas in Asia