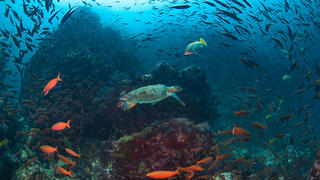 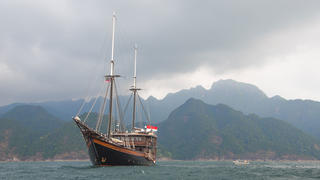 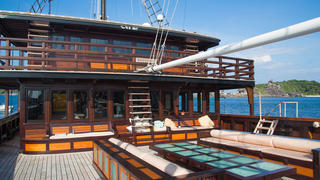 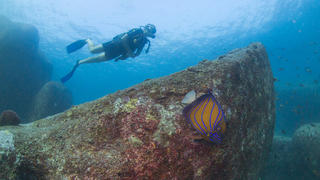 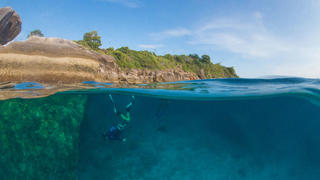 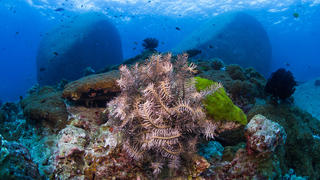 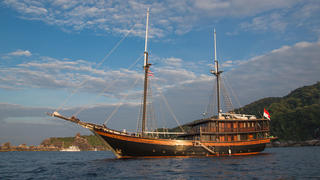 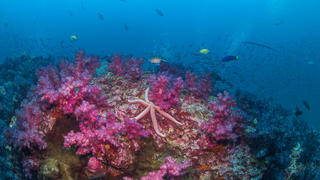 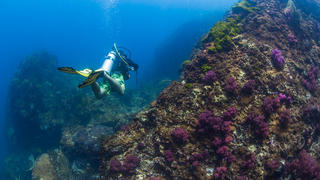 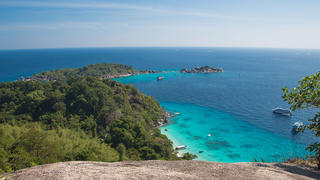 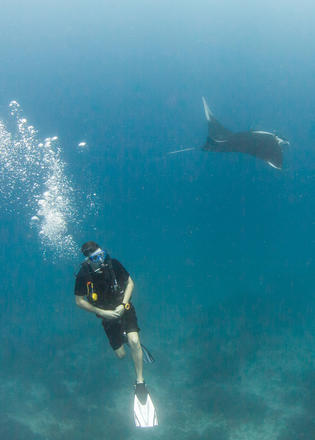 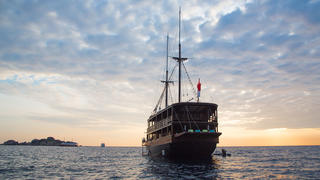 Escaping Phuket to discover dreamlike diving in the Similan Islands

The Similan Islands, in the Andaman Sea, offer some of Thailand’s best and most popular scuba diving, but Kara Murphy discovers that the trick is in finding the lesser-known spots.

My temporary address at the heart of Patong, Phuket, is alive with activity, making me grateful for my enviable sanctuary aboard Dunia Baru, a superbly crafted traditional wooden sailing yacht. The world immediately beyond her enchanted environment on Thailand’s south western side has it’s charms – cocktails, tapas, and sunset views at Joe’s Downstairs to name a few. However, they are contrasted by the hustle and bustle of the city, with its steamy, chaotic streets exhibiting a more fast-paced side of this intriguing destination.

Having been graciously invited aboard Dunia Baru by owner Mark Robba, alongside my husband and several other guests, we embarked on a voyage spanning two countries. We boarded the yacht in Langkawi, Malaysia, then cruised northwest through the Andaman Sea, pausing for a day alongside Thailand’s Ko Phi-Phi Don and Ko Phi-Phi Leh, two dramatic limestone islands with a particularly lovely bay, which starred in the 2000 adventure film The Beach.

Dunia Baru will remain in Phuket for a few weeks after we disembark, preparing for upcoming charters in Myanmar’s Mergui archipelago, about 130 nautical miles to the north. And, we discover, with walking access from shore to shopping (two large supermarkets and a local market) and the only public jetty on Phuket Island’s western side, Patong is a good base for food provisioning.

Waving goodbye to Patong, we cruise northwest, lunching on yet another of head chef Tom Brett’s sublime creations along the way. A couple hours later I wander upstairs to the cool aft deck and the southernmost Similan islands, #1, #2, and #3, are just visible on the horizon. Their forested, slightly elevated landscapes break the uniform of perfect blue sea, and even though #1, Ko Hu Yong, has the longest (800 metres) white sand beach in the Similans, no yachts are anchored near it; in fact, looking ahead towards the next two islands, I see no other boats at all. The reason, I later learn, is these first three islands are a designated green sea turtle conservation area and closed to the public.

Soon, several more islands – and a few other yachts – come into view; we, too, anchor in the most protected spot, Hideaway Bay, along #4’s eastern side and a couple hundred metres from a narrow but inviting beach, framed by forest. A jungle-cloaked hill also begs exploration, but on-island adventures can wait: for now, I’m desperate to escape the Similans’ 83% average humidity and get in the water.

Two small islands, #5 and #6, which help form Hideaway Bay, are less than a minute’s tender ride away, and while Robba and his family head to the beach with a bucket of toys, the crew outfits guests with snorkelling gear so we can begin exploring the Similans’ underwater world. Succumbing to the ocean’s caress near #6, we’re greeted by a granite boulder seascape – massive rocks, formed by lava, which appear to have toppled into the sea. While the rocks are predominantly devoid of visible life other than algae, the occasional soft coral and thick sea cucumber cling to some, and small fish flit above. Near #5, bits of ship wreckage litter the sea floor, perhaps the product of a merciless storm cornering someone’s rickety craft. A shy humphead wrasse swims several metres away but, noticing us, quickly disappears, while, nearby, an anemone, resting on a submerged slab, sways with the current, harbouring several wide-eyed pink anemone fish.

Refreshed and beaming, we climb back aboard Dunia Baru and gratefully accept the sangria the crew has prepared, the fruity sweetness satisfying our thirst as the sun prepares for its disappearance. Another boat has arrived and anchored in Hideaway Bay, but, like the other yachts, it’s far enough away for us to maintain a sense of peace. Stars command the sky, the Southern Cross reigning over the low southern horizon, and the night is quiet, until Courtney, the operations manager, starts shouting from the front deck.

“A shark! A shark! Oh my God, it was this big!” she cries, stretching her arms. “At least five feet long!” We hang over the side of the yacht, peering into the inky, illuminated waters just alongside us. No shark is visible, but a banded sea snake sashays through the light, momentarily disappearing beneath us, then returning to centre stage. We briefly retreat to the lounge on the aft deck before Courtney shouts again and we race to her side, having missed the giant creature yet again.

The following morning, as the encroaching dawn swallows the stars, we gear up for our morning dive, Anita’s Reef, an easy site just southeast of #5 and #6. At a depth of around 10-15 metres, near the island, stands of hard coral mingle with the boulders, while, to the east, a soft coral and sea fan-covered rock, Hin Muan Deaw (meaning ‘whole roll (of film) rock’ due to its shape), lies at a depth of 12-20 metres.

After breakfast, we tender to #4’s larger, northern beach, home to park headquarters; in addition to a ranger station, the area includes a visitor centre, restaurant, tents, and bungalows. Signs from here direct us along a forest path, then up a ladder to a rocky lookout. Islands #5, #6, and #7 are visible from here – as are some new arrivals. Thap Lamu Pier, about 70 kilometres north of Phang-nga at Amphoe Thai Mueang and also north of Phuket, is the closed point on the mainland to Similans; every day, snorkeling day trip boats from Phuket make the two hour journey, and, from here, we can see the newcomers dropping excited passengers onto the sleepy beach near our anchorage.

Carefully, we make our way back down the path, and, reaching the beach and all agree that it’s time to move on to a less popular island.

Up to ten manta rays have been sighted regularly this week at the cleaning station at Ko Bon’s (#10) West Ridge dive site, so we cruise north for a couple hours, arriving around 2pm. Alas, highly-rated Similan dive sites aren’t lonely places — the commotion is disconcerting, but the prospect of mantas enticing, so we tender over towards a gap in the rocky island protrusion near the ridge. The possibility of downward currents exists on the site’s far western side, so, after descending, we stick close to the rocky wall, within a couple metres of its soft corals and frantic gatherings of hungry fish.

Unfortunately, the primary species congregating here today lacks gills. To avoid confusion with other divers, we backtrack towards our entry point, where a lone manta breezes past, seemingly content in its solitude.

Later, I speak with Thailand Dive and Sail managing director and private dive guide Clive White, who has 16 years’ experience in the Similans. The archipelago needs regulating, he explains: “It is too busy, with too many visiting boats.” If you want to dive with fewer people, he suggests entering the water at 8.30am, 1.30pm, and 4.30pm, when the divers aboard most live aboards are probably between dives.

Fortunately, we reach Richelieu Rock, 40 nautical miles to the north, during one of these times. The isolated site isn’t part of the Similan Islands (it’s within Mu Ko Surin National Park), but, thanks to its diversity of marine life, it’s considered Thailand’s best dive site, and we wouldn’t dream of missing it. We approach at low tide, when the flat, horseshoe-shaped, sedimentary limestone rock’s pinnacle breaks the surface by about a yard. Richelieu is known to be one of the best places in Thailand to see whale sharks, but sadly White only saw 10 of the creatures over about 450 dives last year. Despite this news, the rock’s cloak of coral and the relentless flurries of smaller fish steals my heart. Dreamlike corals in hot pink, steamy red, and royal violet pop out beneath the beam of my dive lights, providing a soft haven for butterfly fish, a rising hawksbill turtle, puffer fish with eyes the size of ping pong balls, anemone fish, cuttlefish and two groupers, while sneaky scorpion fish – a constant reminder to look but not touch – hide within the hues.

Thanks to White’s timing recommendation, we encounter just a handful of other divers. You can, it seems, escape Phuket’s sometimes maddening crowds – you just have to dip beneath the surface at the right time and discover an underwater wonderland.

When to go: The Similan Islands are open to visitors from November through mid-May each year; they’re closed at other times due to frequent storms, harsh winds, and high waves. December through March offers the best visibility.

Charter:Dunia Baru can include the Similan Islands on charters travelling to or from Myanmar’s Mergui archipelago. She sleeps 14 in one master and six guest cabins.

All picture courtesy of Kara Murphy

Diving in Mergui on board luxury yacht Dunia Baru

10 days exploring Thailand and Myanmar on board luxury yacht Tiara