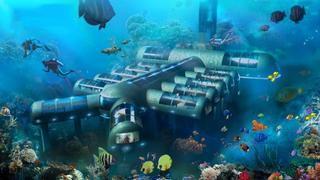 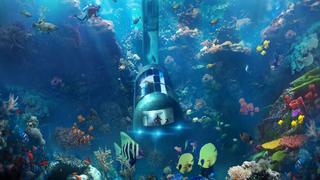 The world’s first underwater hotel may become a reality

Not content with designing the highest, biggest or craziest buildings, boundary-pushing architects are now turning their attention towards the ocean – and not just to create inspiring yacht concepts.

Having already received USA Patent and Trademark approval, the Planet Ocean Underwater Hotel will comprise of 12 rooms located 8.5 metres below the surface of the ocean and aims to offer unparalleled panoramic views of life beneath the waves.

The hotel will employ special exterior lighting and incorporate a sustainable feeding system to attract marine life in an attempt to guarantee an immersive underwater experience for every guest. The hotel will also offer all the trappings of a luxury boutique hotel including nightly cocktails, WiFi, Sirius/XM music, HDTV, room service and gourmet dining.

Accessed via a sealed lift, each ‘single-unit’ hotel is technically classed as a vessel because of its ability to navigate the ocean using electromechanical propulsion technology. In layman’s terms, this simply means that the entire hotel is able to move to another underwater location under its own power – a crucial ability when seeking shelter from hurricanes.

A test site for the first hotel has already been selected and, while it cannot be revealed as its permit is still pending, it is hoped that underwater hotels will eventually be built in 22 locations around the world including the Maldives, Egypt, the Bahamas, French Polynesia and Cuba.

However, with tourism and its side effects of climate change, plastic debris and pollution considered one of the biggest threats to the world’s oceans, the underwater hotel will try to offset any damage using Biorock coral reef restoration. Each hotel will surround itself with manmade rocks created from minerals extract from seawater that help to promote the growth of coral and the return of marine life at an accelerated rate.

14 of the best hotels with luxury yachts