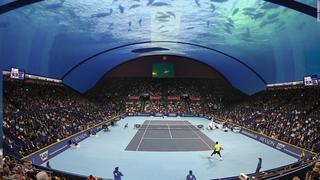 The superyacht industry is used to inspiring yacht concepts but a Polish architect’s plan for an underwater tennis stadium in Dubai pushes the boundaries of ocean design.

Krzysztof Kotala wants to create the world’s first underwater stadium, complete with a curved roof, to enable spectators to watch sea life as well as the game.

Kotala has chosen Dubai, which is already home to the world’s highest tennis court, as the location for this extraordinary creation. The founder of the 8+8 Concept Studio in Warsaw is now looking for investors so that he can turn his underwater Wimbledon vision into reality.

“This will be something original,” he said. “It should be somewhere where there is the tradition of tennis. Dubai is perfect for this idea.”

Concerns were raised when the plans were revealed that the structure would have major engineering issues. The main problem suggested was that it would not be possible to create a wide enough piece of curved glass to cover the court. However, Kotala has refuted these claims insisting that it would be a case of using bars in between the glass to support the structure.

“In matters of design and glass, there is no doubt that 95% [of the] issues that may limit the project have been resolved at this point,” he said.

Despite Kotala’s enthusiasm it is thought that an investment is yet to be secured. However, considering plans are already underway to build the world's longest indoor ski slope in Dubai anything is possible.

4 reasons why you should buy your own personalised floating island