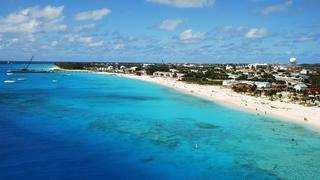 The Turks & Caicos islands are a great charter yacht destination thanks to several marinas, most of which offer extensive docking and complete entry facilities. The biggest of these, Turtle Cove Marina, is only a short walk to the white sandy beaches the islands are famous for. While Turks & Caicos is primarily loved for its clear waters, excellent beaches and reliable weather, there is also a wealth of water sports to try. Kayaking, snorkelling, whale-watching and dolphin-petting are all popular, as is island-hopping and eco-safari. Turks & Caicos Map

Turks & Caicos consists of 40 islands and cays, only eight of which are populated. The main tourist centre, Providenciales, is the most well-known, but the peaceful islands of north and middle Caicos and the historic Capital Island of Grand Turk are also well worth exploring, with most islands easily reached by boat. The islands all have their own character, with some boasting lush woodland, underground caves that can be explored, great fishing and natural phenemonens like the boiling hole. The islands have had a long and chequered history since Christopher Columbus discovered them in 1492, and have been captured by several different countries. Their slavery past can be explored by visiting the 200-year-old ruins of Cheshire Hall, a cotton plantation that at one time held 384 slaves. Now, the Turks and Caicos natives are called Belongers and are either descendants from African slaves or immigrants from the Bahamas. Thanks to its close proximity to the US, the islands are popular with American and Canadian tourists, with various American airlines offering several flights a day. Fortunately, flights from the UK are numerous, with British Airways operating regular flights from London.