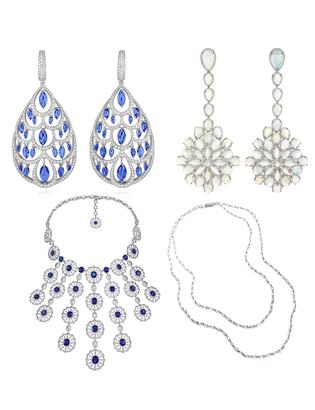 Chopard stoppers: a history of fine jewellery at Cannes

Over 18 years ago the Swiss jewellery house Chopard made Cannes Film Festival sparkle. And it didn’t take long for Hollywood to catch on.

It’s not just the frocks that create acres of coverage at Hollywood awards ceremonies like the Oscars and the Golden Globes. The jewellery that accompanies them is equally headline-worthy.

This is something Caroline Scheufele, Chopard’s creative director and co-president, realised 18 years ago when she approached the Cannes film festival organisers and offered to redesign their premier award, the Palme d’Or. Chopard was already a successful jewellery company but the red carpet industry was in its infancy and most of the jewellery worn by stars, especially in Hollywood, came from American brands such as Harry Winston, Tiffany and Fred Leighton. At about the same time, designers such as Giorgio Armani and accessory brands such as Jimmy Choo started to make links with stars and their stylists, offering specially tailored pieces to actors before big events.

Scheufele thought that the same could happen in Cannes and sure enough Chopard quickly became the top jeweller of the festival, in demand by actresses from around the world. Word spread fast. Now, as Scheufele says, “The big Hollywood names increasingly come to Cannes where they discover our jewellery and this evolves organically for appearances back home so we set up a similar operation in Hollywood.”

These days Chopard has perhaps the highest profile of any European jeweller in Hollywood. At the recent Golden Globes, Julianne Moore, Dame Helen Mirren, Lupita Nyong’o and Livia Firth all sparkled in striking Chopard jewels.

Despite the Hollywood success, Scheufele’s heart still lies in Cannes, with its glamorous backdrop of the azure Mediterranean and a harbour packed with superyachts during the festival. “There is a difference between the jewellery chosen in Hollywood and Cannes,” she says. “The Hollywood events are one-offs, so people have one chance under the eye of the critics, whereas Cannes lasts 12 days and there are many events. Hollywood is more classic, with a concentration on diamonds with small clusters and necklaces, though no one wears suites any more. They often choose one bold piece.”

In Cannes, however, she finds “people are more adventurous, keener to show their personality, and go for long chandelier earrings and big cuffs, often very colourful. I sometimes think it’s because of the relaxed Côte d’Azur ambiance”. As such, she finds herself invited to glamorous parties aboard yachts and has a stockpile of suitable jewellery. “I love our Happy Sport watch, with free-floating diamonds and jewelled fish,” she says. “It has a rubber strap and it’s a diving watch so I swim wearing it. I also love pale coloured stones in watery shades that we mix – aquamarine with amethyst, for example, as earrings – and then, for yacht cocktail parties, there’s nothing better than a bold ring with diamonds and a stunning coloured gem.”

In addition, the ever-expanding Animal World range of one-off pieces includes a surprising number of sea creatures. “They are unique designs that never get repeated,” she says, “but fish are a theme I return to in new ways. They are such positive symbols in many cultures and we are launching an important new fish necklace at Basel this year.” Now you know what to look out for at this year’s Cannes film festival in May.

The Best Valentine's Day Gifts For Him

The Best Smartwatches for Superyacht Owners