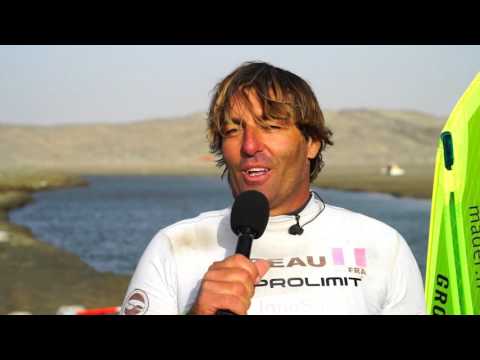 With some the world’s fastest superyacht tenders topping out at around 55 knots, how fast do you think one man surfing on wind power alone can go? For most 25 – 30 knots wouldn’t be an unreasonable guess.

Well think again as French pro-windsurfer Antoine Albeau just set a new world record of an incredible 53.27 knots – beating the previous record of 50.07 knots which Albeau himself set in 2013.

The feat was achieved at a custom-built ‘ditch’ in Luderitz, Namibia which has been designed to offer perfect weather conditions for speed sailing. Located in a wide, low basin, the ‘ditch’ provides strong winds and extremely flat water giving Albeau optimum control of the board while providing the greatest amount of power from the wind available.

Albeau chose November 1 as the date for his attempt as the westerly breezes blowing in from the Atlantic at this time offer stronger gusts than at any other time of year. Of course, Albeau and his team spend a long time tweaking the equipment to be as efficient as possible, but in the end the outcome is largely dependent on the weather conditions and it took Albeau 28 attempts to finally reach his top speed.

However, travelling at this speed doesn’t come without a few dangers and Albeau did suffer from a potentially damaging crash. While sailing at speeds in excess of 51 knots Albeau slipped from his board and, because of his velocity, literally bounced off the water and skidded across the surface before sinking.

Albeau was undeterred and finally achieved his goal of setting a new world record. So what’s next? Going even faster of course. Albeau now has his eye set on chasing the current kiteboarding world record of 56.62 knots.

Of course, going extremely fast isn’t the only cool thing you can do while windsurfing. A recent Storm Chase event saw four competitors windsurf through a hurricane while the Defi Wind competition allows the very brave to race against 1200 other windsurfers annually.