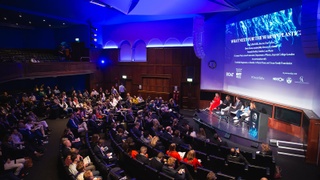 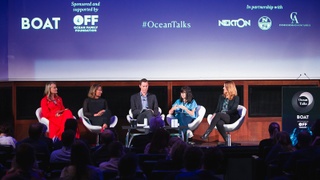 A panel of industry experts has called on governments, businesses and decision makers to act fast and curtail the world’s out of control plastic consumption.

Speaking alongside co-founder of A Plastic Planet Frederikke Magnussen and plastic campaigner Amanda Keetley, the panel discussed the future of the global plastic epidemic.

Caffari revealed a number of findings from her experience leading the Turn the Tide on Plastic youth team in the Volvo Ocean Race last year.

After attaching a micro analyser to the boat, the team were able to carry out meaningful research into the health of the oceans. The device recorded the PH levels and temperature of the water before it passing it through three filters that measured the presence of micro plastics.

She revealed there were only three locations in the world that had no micro plastics – north of the Falkland Islands, west of Ireland and south of the Great Australian Bight, largely due to ocean currents.

“The scariest thing was that at Point Nemo in the south Pacific Ocean, which is the furthest point from land where the closest person to you is in the International Space Station, we found micro plastics,” she revealed.

Keetley, who this year published Plastic Game Changer - a book informing businesses how to reduce their plastic consumption, revealed that 50% of all plastic produced is single use.

“Businesses need to make the pledge to make changes now and do it fast,” she said.

Evans agreed, calling for a collaborative, global approach. “It requires governments to introduce taxes on plastic production, it requires consumers to vote with their feet […] and it’s going to require massive investment when it comes to recycling infrastructure,” he said.

Meanwhile Magnussen, from A Plastic Planet, raised concerns that global plastic consumption will lead to a future human health disaster.

“A new study out there says we are now eating the equivalent of a credit card of plastic every week,” she said. “It’s in our honey, it’s in our soil and it’s leaching from our packaging.”

Dr Wade agreed that “understanding how plastic impacts our health is a really big scientific challenge” before arguing that the plastic problem can only be solved with global collaboration.

“We need to take action now to stop it impacting us and the world we live in,” she said. “But this is a global challenge, it’s not just a United Kingdom challenge […] we need to work collaboratively and globally because supply chains are so diverse and not transparent.”

'Caught in the Net' exhibition partners with Blue Marine Foundation