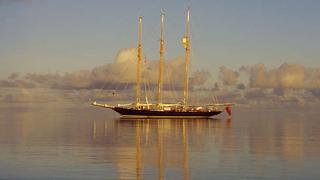 A sense of adventure

Classic yachts can be beautiful and romantic, but sometimes one has to admit that the science of naval architecture has advanced somewhat during the past 100 years.

The 55m schooner Shenandoah of Sark is a familiar sight in many parts of the Pacific because she maintains a nearly continuous cruising programme, but she does need an awful lot of TLC to keep her in top condition. Her 2008-9 cruising programme was therefore due to finish in mid-2009 at Auckland, New Zealand, where she was booked in for a major refit. For the previous year-and-a-half, the plan was to visit selected portions of Central America in addition to a large portion of the Pacific.

I love getting back into the Pacific Ocean, says her master, Gavin Reid, but after so many years of tropical islands, crystal-clear water and white sand beaches, the places that really stand out are those which are a little more unusual.

The sub-Antarctic island of South Georgia will always remain one of the most incredible destinations we have had the privilege to visit for its rugged beauty and abundant wildlife. Madagascar too was so vividly different culturally and physically to anywhere we had been before that it made a very welcome change by the time we got there.

With so much cruising experience, Reid and his crew have grown adept at dealing with officials and adapting to limited available resources.

I have never found bureaucracy to be too bad when off the beaten path, Reid says. Such delights seem to be the preserve of popular destinations with overpaid officials. However, in countries like India or the Philippines where they love their paperwork, a good local agent is invaluable.

Crew need to be much more hands-on and resourceful than most are used to, Reid continues. For example, if the stewardess needs flowers, go ask the local priest who decorates the church on special occasions for them, and more often than not you will either be directed to some little old lady who can get what you need, or a handful of local kids will spend the afternoon running around the village picking flowers with delight for you.

I have sent chefs off into the jungle with a couple of islanders, armed with a machete to go shopping, and we do everything we can  catching fish, making preserves, drying herbs  to eek out our fresh produce for as long as possible. However the chefs definitely need to be willing to experiment with all the weird and wonderful local produce.

A bit of local knowledge also goes a long way. French Polynesia, for example, is ridiculously expensive, Reid explains. You stock up in Panama on the way through  a years supply of toiletries, cleaning supplies, beer for the crew, batteries  anything that is hard to get or outrageously expensive in the islands.

Garbage management is also a major issue, particularly as many of the small islands have their own garbage issues.

We strip everything of as much packaging as possible before it comes on board, says Reid, which also helps avoid bringing weevils and cockroaches on board.

Of course, being more than a century old, Shenandoah of Sark presents a challenge on the maintenance front, but Reid does not see this as a reason not to take a classic cruising. Amongst the skill set off the crew there is always a rigger, a carpenter, and someone good at metal fabrication and general gear maintenance.

We also have two of everything, says Reid, and we carry a vast inventory of spares as well as timber of every type used on board, sailcloth, and rigging. We always work on the principle of keeping enough spares and supplies on board so we can go anywhere in the world at short notice.

We also carry two parachute-style lift bags as used by salvage divers which have proved invaluable for lifting a fouled anchor, and we carry four very long floating lines for mooring to trees, rocks, reefs, etc.

For all the cruising that Shenandoah of Sark and her crew have undertaken, though, they have one piece of advice for owners and captains seeking to plan a voyage. Do not be put off cruising a particular destination by the negative comments of someone who may have visited the area before, Reid urges. Many a time when investigating a new destination I have been told the locals can be difficult, followed by some horror story, but I often think this comes down to the manner and personality of the crew when dealing with the locals.

If you are friendly and respectful of their culture and their rank within their society you generally get a wonderful reception in return  even if it does take a while to break the ice. It is important for guests and crew alike to be informed of local etiquette and taboos before going ashore.

These simple considerations make for a much better cruise for all, and it is these cultural elements that are a large part of what makes remote cruising so rewarding.