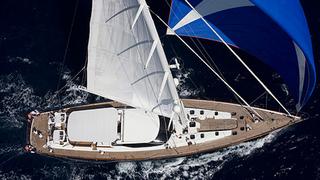 Tim Quinlan at Lilley Marine tells me he's found a buyer for the 40 metre sailing yacht Tenaz, jointly listed for sale by Mcmaster Yachts and Burgess.

Tenaz was built in aluminium by UK yard Pendennis to a design by Dubois and launched in 1996 as Mamamouchi with an extensive refit in 2010. She went on to win the Voyager award at the 2010 World Superyacht Awards.

ABS classed and MCA compliant, Tenaz is in excellent condition with all the benefit of a refit where the ‘behind the scenes’ mechanics and infrastructure have been comprehensively refitted and replaced where necessary. She has a sleek profile which gives wonderful visibility forward from her huge cockpit and has earned a superb reputation for her performance under sail.

Capable of sailing the world in comfort, speed and style, Tenaz sleeps 10 guests in a master, two twins and a single cabin, all with en suite facilities. Under power, a single 820hp MTU engine gives her a range of 3,350 nautical miles at 10 knots.