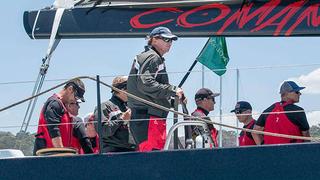 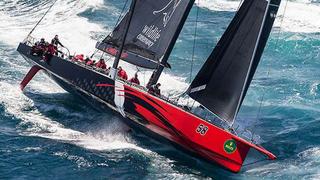 For all practical purposes, we shouldn’t have been on the starting line of the Rolex Sydney Hobart with Comanche, given the time constraints of designing, building and trying to shake down not only a brand new boat, but also a brand new concept. We had our share of gremlins, but they were all little ones, which was just an unbelievable pat on the back to the design, engineering and build teams from Verdier/VPLP, Hodgdon and North Sails Design Services – because really it was nothing short of a small miracle.

We – especially Jim and Kristy Clark – hoped that a project like Comanche would turn heads and get people, maybe even outside of the sport, to start looking at sailing as something fashionable, fun, fast and cool. And this project, at least in its infancy, has done that more than any of us could have imagined.

We had read, heard and seen the start of Sydney Hobart races in the past. I could only imagine what it was going to be like. Is it like a Volvo start? Is it like an America’s Cup start? Lord knows we’ve done plenty of both of those. But this has a different feel to it, a different vibe; it seemed like not just the whole city but the whole country knew about this start, watched it live on television and were lining the harbour shores. This unbelievable moment for all of our sailing careers was made even better by how Comanche lit up: we couldn’t have chosen a better wind angle to show off the boat to the world. That was about as fun as it gets.

So how did superyacht Comanche _perform? First of all, the boat is in essence exactly as advertised. As soon as you crack sheets, it lights up. I talked to the guys from _Wild Oats after the race and they were most surprised about how well this boat goes upwind. We had never gone up against another boat before, and all of a sudden we go off the starting line and take off, going upwind and sailing away. But we can still improve. When all is said and done, we were still ahead of one of the best, if not the best, upwind 100-footers (30 metres) in the world.

Waves are the biggest challenge of the race. That’s what separates the Sydney Hobart from other races. They are always there, they are always angry and there’s no rhyme or reason to them. Whether you’re going upwind, reaching or downwind, it’s a different animal down there. It was awful for a while as I was just waiting for something big to break.

Then we sailed into the light air with huge lumpy seas and Comanche performed as expected as well. There was a combination of factors: we were holding off Wild Oats with the masthead Code 0 up until it dropped down into really puffy, fluky wind of under six knots true wind speed. Mix together the huge leftover head seas that day and it honestly just couldn’t have been worse for us. The more we sailed south the quicker we sailed away from the high-pressure ridge that became the dominant feature on the racecourse. Wild Oats sailed into better pressure first. Game over.

The other challenge was meeting obvious expectations of this programme and that is always very, very hard. Yes, we were disappointed to be second but I’d say thank you to Jim and Kristy’s total understanding of the whole thing; they’re incredibly proud of the whole project and they see the future. Jim and Kristy were our biggest fans when we hit the dock and they understand that Comanche is a long-term project; we’re still working the bugs out and it was just phenomenal to get there in one piece, put on a good show and make it reasonably close.

As I write this, Comanche is in Melbourne and about to go on a ship again back to the US – it will be the most travelled young boat in history, I would guess. We’re trying to decide whether we do a quick winter schedule, maybe down in the Caribbean, or a larger work list and bring her up to Newport, Rhode Island, to get her ready for more of the big ocean race events, the great races such as the Rolex Transatlantic Race, Rolex Fastnet and Rolex Middle Sea. It’s going to be an exciting year.