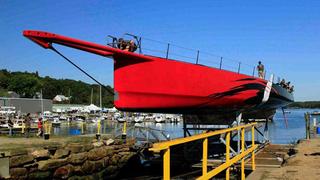 The Maine-based shipyard invited the public to watch the launching of its latest project this weekend. 'Comanche was designed and built to break monohull sailing records,' said Timothy Hodgdon, president of Hodgdon Yachts, during the Monaco Yacht show last week. 'She's going to be fast! We're very proud of this boat.'

This racing machine is anticipated to reach upwards of 30 knots. Comanche will be put to the test for the first time during this year's Rolex Sydney to Hobart Race, making the passage after the boat is rigged and sea trialed in Newport, Rhode Island.

The carbon-fibre built Comanche marks a step in advanced build technology for Hodgdon Yachts, the oldest builder in America. Hodgdon's European Sales & Marketing Director Cyril Le Sourd, appointed to head the company's recently opened office in Monaco, notes the builder's ability to blend traditional and modern boatbuilding as its strength. 'One shed we can have this aerospace technology build and in the next we might have a classic,' he says.

Comanche has been launched after an extremely compressed build schedule, built for experienced owner Jim Clark, who has famously owned the 90-metre Royal Huisman iconic superyacht Athena, which is currently for sale. The yacht's carbon fibre hull sports a fierce red-and-black paint job that should look sharp as she flies across the water at her expected high speeds.