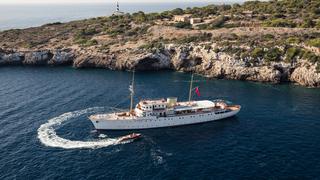 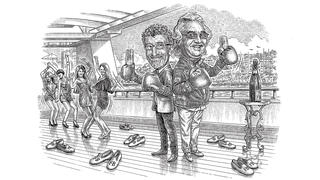 Rucking with Flavio Briatore, attending wild parties and performing at others. There’s a reason Eddie Jordan doesn’t know how to use social media… he’d only get himself into trouble...

It has become almost a cult thing, to find an old boat and refit it. I was at the launch of Shemara a few years ago and was blown away with what Sir Charles Dunstone did with that boat. We’ve known each other for years after sitting on the same hedge fund board. I was a little surprised when he bought her – he’s a sailor through and through. I’m not sure I’d ever follow his lead, though, and go for a refit or rebuild or anything like that. You’ve got to be really excited about the history of a boat to make a commitment like he did with Shemara. I just need something that I can step on and have work straight away, without thousands of engineers hanging off it.

My old sparring partner Flavio Briatore did a similar thing to Charles when he refitted Force Blue, though that boat is not nearly so old. When I first saw the boat I thought, “Oh no, I don’t like that”, but then I stepped on board and saw that the level of the interior design and creativity was quite incredible. It’s very Flavio, with lots of velvet, of course, and there are slippers everywhere with “FB” on them. It’s like stepping into a movie. You can’t help but say, “Oh, my god, this is amazing”.

Flavio was a flamboyant member of the Formula One paddock when I was a team owner, and we used to fight like hell… you cannot imagine. We used to want to stab each other, on a regular basis, over drivers, sponsors and staff. But he’d always be the first to say, “Do you want to come to the party tonight?”, even though we’d been rucking like crazy. And I’d go and it would be a hell of a good night and then we’d be back to rucking the next day. And then the next week we’d be embracing each other like two long-lost brothers. And that’s the relationship I have with him, even to this day.

I could never fault him on the parties he used to throw – models all over the place and some goings-on that would end up with me in hot water if I wrote about them here. But he’s settled down a bit now, with a beautiful wife and son. I can’t see him ever retiring.

He’s got a successful clothing line in Billionaire, plus the Billionaire Club in Porto Cervo. I’ve seen people go in there and spend hundreds of thousands on Champagne and caviar. It’s one of those places people like to go to party when their big boats are out in Cala di Volpe. He’s also got Twiga in Monaco, where my band sometimes play. He’ll always come down and introduce us on stage. But Flavio didn’t have the biggest Formula One party boat – that honour belongs to Vijay Mallya. He used to have 400 or 500 people at parties on board Indian Empress. How he managed that I have no idea, but he did.

There’s been lots of news about Formula One in the press lately thanks to its sale to Liberty Media. I think the sport is lucky, and in two or three years’ time it will be in a better place. There’s lots to be done on the digital front, with social media and things like that, since it’s such a prominent part of the world we’re living in. I still have a bit of difficulty with it. I don’t tweet and I’m not on Facebook or Instagram. Jesus, I’m such a clown that I would get myself into the most awful trouble.

Talking of trouble… two of my favourite events of the year are coming up: season-closing parties, one at Prince Albert’s place at Roc Agel in Monaco, where we play, and the next at Anjuna in Eze. It gets out of control, with about 400 people pissed by lunchtime. It’s the wildest thing you’ve ever seen in your life. No camera phones allowed!