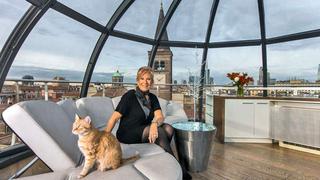 Ive agreed to meet Paola Trifirò at her apartment for a coffee before we head out to lunch, and my plan is to meet the photographer outside so we can go in together. Ive not reckoned on the efficiency of the doorman, however; he quickly pries out of me the reason for loitering on his pavement and phones up to announce my arrival.

Once in the lift, I call the photographer to let him know where I am  only for the doors to open directly into the penthouse apartment where Paola Trifirò is kindly waiting to greet me. I hastily put the phone away. This time, my lunch guest definitely saw me coming first.

Paola and her husband, Salvatore, live in a beautiful apartment in a 17th Century building at the centre of Milan. They are both lawyers, in a partnership that bears their name and employs more than 80 people. Today, Salvatore cant escape from work, but Paola is a most gracious and entertaining host, remarkably so, considering she has very recently had an operation and is still struggling with the bronchitis she caught during her stay in hospital.

The illness has left her short of breath, and after an espresso we lunch in the apartment. I could write an entire story solely about the couples stunning home, with its gorgeous modern interior, art collection, library and the skyline views of San Marcos church, Brera Art Gallery and Academy, Milan city centre and the distant snow-capped Alps  all of which can be viewed from an extraordinary glass cupola. Its also an interesting place to start the conversation about boats.

I wanted to study architecture, says Trifirò, and my father said, You dont understand anything about mathematics, which was not true, really. My mother was a Latin and classics teacher, and was always pushing me towards Latin. When I had the occasion many, many years later to put myself to the (mathematics) test, I saw I could have done it, but it was too late. Instead she chose law, which is where she met her husband. The urge to design and create had to find another outlet, and sailing boats were the ultimate beneficiaries.

They cruised as far as Capri and Corsica in this boat, while Paola learned both sailing and astro-navigation. They kept it for about three years, until 1973, before feeling it was time to upgrade. They briefly replaced _Calife _with a Swedish-built 8.5-metre yacht, before settling on something a little bigger, at 11.5 metres. The couple kept her in Saint-Tropez, France, and drove the 250 miles there and back every weekend to cruise her along the French coast. The next step up was a 14m Dufour yacht bought in 1978; the pattern of buying something a little bigger every few years had been established.

The Trifiròs were committed cruising sailors and the Dufour significantly extended their range. This time they ventured much further afield, visiting Tunisia and North Africa. A Jongert was next, found with the help of Herbert Dahm. It was called Black Shark; the name was not mine, but it looked like a hotel, like a first class hotel, says Trifirò. But there were problems. The beds were positioned in a stupid way, so we [only] kept it a couple of years.

At this point the Trifiròs had their first real brush with boat building. We were enthusiastic to have an old Italian boat, a masterpiece, and so we started looking, recalls Trifirò. They found what they wanted in Val III, originally built by Cantieri di Pisa at their Cantieri Navale Italiano yard in Porta a Mare on the Navicelli channel. The yard only built sailboats for a few short years from 1957, and the 21m ketch was the last it produced, in 1966.