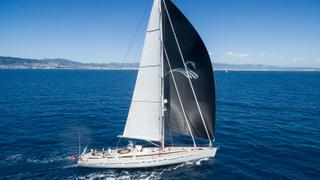 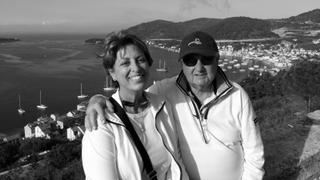 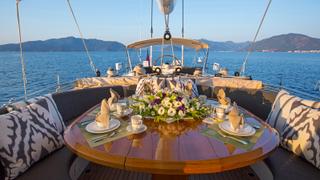 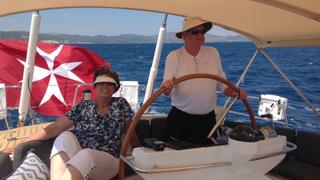 14 September 2017 by Interview by Grace Trofa

Superyacht owner Randy White and his wife Lâle are both entrepreneurs and avid sailors. When the time came for a larger vessel, they went for 28.45 metre Savarona...

We’ve owned a Morgan 28, a Ranger 33, Islander 36, Swan 53 and now the CNBSavarona. We named her after a particularly large swan in South Africa that feeds off other swans.

We looked at 20 boats in two years, but what clinched the deal with Savarona was the Germán Frers-designed hull. Ours was the third hull off that mould, the first being Mari Cha II. We come from a racing background, so any boat we own needs to be a performance-oriented boat.

The vessel had a complete refit in 2014 and our favourite place on board to be by ourselves is a cushioned, built-in love seat, which adjusts like a lounge chair up forward on the bow.

We bought Savarona because we wanted to go longer distances after 10 years in the Caribbean. We prefer the Med. We both love Palma (Mallorca) so much that if we didn’t keep the boat there we would buy a second home on the island. Our keel is a centreboard configuration, which we love because we can tuck into small ports.

I have been sailing for 50 years and logged over 30,000 nautical miles. I started my sailing career at the back of the boat, pulling the sail forward. It was the place of most movement, but at 19 you don’t think about getting seasick.

When I race I am straight out, and will press the boat to the limit. My racing days are over but if somebody is nearby, I’ll tighten the sheets – I can’t help myself.

Our top speed is 24 knots, we set that record on the Atlantic crossing on March 13, 2017, when we hit a Force 9 storm. A wave built right under the boat and in less than a second lifted the whole stern straight up. I was looking at green water as we slid down that wave. We were screaming in excitement.

My wife and I celebrated our 35th wedding anniversary at the America’s Cup. We had a spot at the Navy Pier and I reported the action live on my website, sailangle.com. It started as a fun thing to do in retirement and now has over 334,000 members.

What makes being at sea so addictive is the solitude and the peace and quiet of just hearing the waves washing over the hull, and the wind. It makes me feel very small and it’s a spiritual experience. I feel alone and alive.

My life in boats: Ricardo Baptista, owner of Carobelle

My life in boats: Mark and Mary Shores, owners of Marae