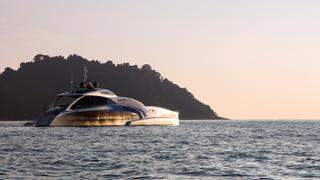 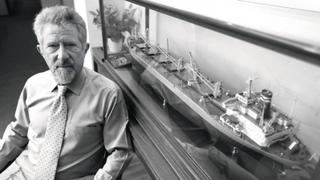 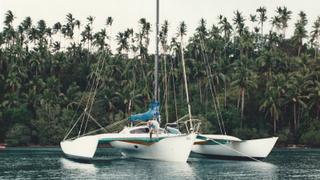 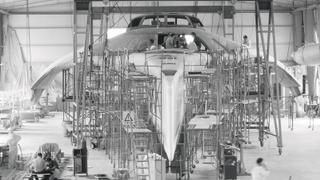 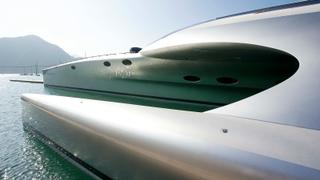 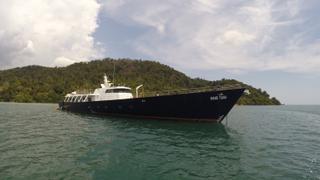 On board with Anto Marden, owner of trimaran superyacht Adastra

The Hong Kong-based shipping magnate and superyacht owner Anto Marden tells Dominique Afacan that, while far-flung adventures in his 42.5 metre trimaran Adastra are fun, Asia is where his heart lies...

“It’s a beautiful day and I’m stuck in the bloody office!” Anto Marden is speaking to me from North Point, Hong Kong. Clearly, though, there are places he’d rather be, most likely on board his 42.5 metre trimaran Adastra. And who can blame him? Built to cross oceans and fuel adventure, she was the talk of the town when she was launched back in 2012, her John Shuttleworth-designed lines and futuristic silhouette making her look like some very stylish aliens had dropped right on to the South China Sea from outer space.

“She’s a massive head-turner,” says Marden. “Everywhere we go, the local paper writes a story and everybody always takes photographs of her. It’s like living in a goldfish bowl.” In reality, Marden lives on The Peak, Hong Kong’s exclusive mountainside neighbourhood where residents can survey the city’s extraordinary skyline over breakfast. It’s a view that must have completely transformed since Marden was born here 67 years ago, but the Royal Hong Kong Yacht Club, which he can see from his office today, has been around since day one, and sailing has always been a big part of his life.

“Dad always had a powerboat in Hong Kong,” remembers Marden. “We used to tow a little dinghy behind it when I was a kid, so I started sailing when I was very young.” His first clear memory of boating was aged seven, in Deep Water Bay, an upmarket enclave on Hong Kong’s south side, but soon after he swapped sandy beaches for the Surrey countryside and started his education in the UK. With both parents born in Shanghai, Marden had some seriously colonial roots, but the UK clearly left a favourable impression and he later enjoyed a few years of northern grit at Leeds University, where “greasy cobblestones, flat caps and mild ale” were the order of the day.

With a degree in Chinese and politics under his belt, and speaking fluent Mandarin, the obvious choice was to return to Asia and set up shop. Marden, though, was keen to keep things interesting and, after a stint on a farm working as a shepherd, he headed out to the Caribbean to sail Spronk cats from St Maarten to St Barths. “That’s when I really got into multihulls,” he explains.

Then, en route back to Hong Kong to start working for his father, fate intervened when he met a couple of guys in the Philippines who had just sailed a trimaran all the way across the Pacific. Marden was impressed. “I persuaded them to build a 16 metre Kelsall catamaran called Airmail for a friend in Manila,” he says. That boat is still afloat today and the same team also went on to build Marden’s 13.7 metre trimaran Mazinga, designed by Adastra visionary John Shuttleworth.

“Mazinga still goes pretty well too. I was actually on board a couple of weeks ago in Manila Bay,” says Marden. Years later, having set up his own shipping company and become firmly established in Hong Kong, Marden decided to set the wheels in motion for a project that had been on his mind for a long time. “I’d always talked with John [Shuttleworth] about building a big power trimaran,” he says, “so we finally got it together and started planning it.”

Adastra, by all accounts, was a huge project and incredibly expensive – taking three years to build, although Shuttleworth’s vision was clear from the outset. “John is pretty handy with drawings. The first one he sketched looks remarkably like the final product,” says Marden. McConaghy Boats in Zhuhai was the obvious choice of shipyard, close enough for Marden to visit once a month and with a trusty reputation. “Old man McConaghy, who lived in Sydney, was the first person ever to build a composite boat using carbon fibre. They are the best for building big racing monohulls, so I was fairly certain that they could build a really strong composite boat,” Marden explains.

Marden took off on the yacht’s inaugural trip with wife Elaine. “We spent about six weeks sailing through Indonesia, Singapore and the Philippines. That sailing area is pretty much home territory,” says Marden, which is something of an understatement. In fact, he owns a cluster of private islands in the region, among them Pangkil and Pulau Joyo, both of which have proven enormously popular with Singaporean expats. “Both of the islands are located off Bintan,” says Marden, “and they are very successful. It’s all made out of driftwood. We rent them out, Pangkil in its entirety, Pulau Joyo more like a hotel.”

Adastra was built for crossing oceans so it was inevitable that adventures would open up far beyond Asia. Regattas, boat shows and sporting events like Formula One Grands Prix or the America’s Cup hold little appeal. “I have nothing against them but I wouldn’t want to make a destination out of something like that,” he says. Over in the Mediterranean, northern Mallorca gets his vote. “The top end of the island is pretty cool,” he says. “There are lovely cliffs up by Formentor and you can still get a pretty secluded anchorage.” Fiji is another favourite. “You don’t pay the harbour master there, you bring a bunch of kava and present it,” he says. “You sit down with the chief, have a little natter, hand over the kava, a rugby ball and a few sweets for the children, then you’ve checked in. You’re given the freedom of the village and the island, which is a nice way of doing it.”

Adastra is the perfect vessel for such far-flung travel, not least because she is so fuel efficient. “She just recently crossed the Atlantic from St Maarten to Vigo,” says Marden. “She was 12 days at sea averaging around 11 knots and we had enough fuel on board to turn around and go back again without refuelling, which is pretty cool. I think she did about 3.4 litres to the mile.”

Of course, with so many ocean hours under her belt, there have been hairy moments, although Marden wasn’t on board for one of the worst. “The boat was off Tahiti when all the portside portholes were smashed in by a wave and the boat started filling up with water. They managed to staunch it and she went back to Tahiti for repair. Other times we’ve had waves breaking over the hull, but ultimately she’s incredibly seaworthy.”

Seaworthy, but also extremely comfortable, largely thanks to Marden’s wife of 30 years, Elaine, who was heavily involved in the interior design. “Elaine is definitely integrated into the team!” says Marden. “We started out in a small sailing boat and now we’re in this nice, big, air-conditioned luxury yacht with five people looking after us, which is great.” Adastra has room for nine guests, although Marden warns other owners against carrying around too much accommodation. “Quite honestly it’s hard to get a whole bunch of people on board – people are busy, or it’s too far away, or they don’t have the time.” The couple have three grown-up daughters but they are scattered across the globe and aren’t able to join on board as often as their parents may wish. “They’re all working now, so it’s difficult. They have commitments,” explains Marden. “One of them is in LA in the movie business, another works for the Boiler Room as a camerawoman and the other is at the Royal College of Art in London.”

Together, they find they spend most of their time on the foredeck. “Out there we have an awning, loads of comfy cushions and beanbags, which are excellent on a boat – even though they are a little bit hard to get out of!” In Asia they find they spend a lot more time on board than off, which is just how Marden likes it. “If you’re in the Med, there are things to do; you can go and see lovely ruins, eat in fantastic restaurants, plus you can visit your mates who are living there. You get off the boat,” he explains. “In Indonesia and around that whole area, there’s basically nowhere to go. You have to be completely self-sufficient, you never see another yacht and that’s the way that I’ve grown to like it.”

The couple spend about eight weeks on board every year, but Marden reveals that they are thinking of selling Adastra in a couple of years. “I’m getting old and I can’t spread myself too thin,” says Marden, referring to the fact that he has a second boat, Hang Tuah, a 41 metre monohull designed by Nigel Irens, which he plans to keep. Before setting any selling plans in stone, though, there is more adventure in the diary this autumn with the pair heading off to the Greek Islands. “After that, she’ll go back across the Atlantic, through the canal and home,” says Marden. “The only reason we ever leave is to reaffirm our knowledge that Asia is the best.”