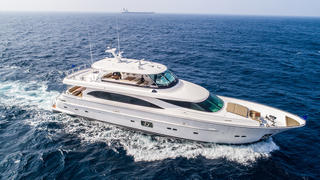 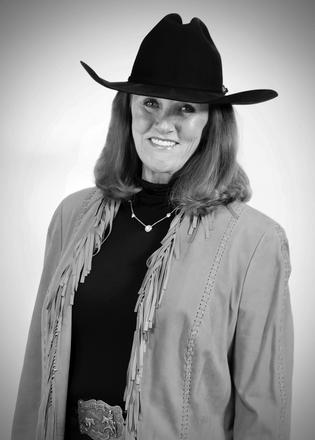 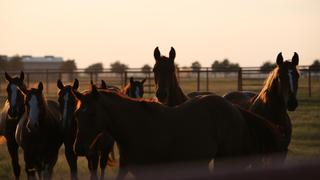 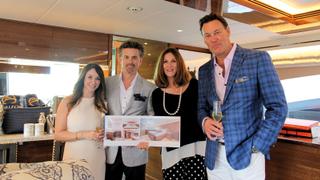 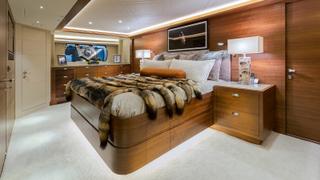 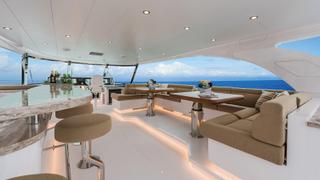 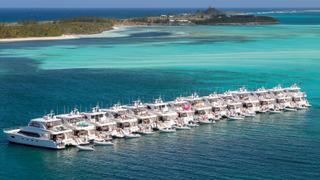 Nothing matches the thrill of riding her beloved cutting horses, says superyacht owner Jo Ellard. But getting away from it all on her 30.33 metre Horizon yachtDo It Nowcomes a very close second...

Jo Ellard is passionate about two things that don’t seem like a natural fit: horses and being on her boat. On Do It Now, her new yacht, she has combined them into an interior that she says is neither feminine nor masculine, contemporary nor classic, but “handsome.”

It’s a far cry from the nautical or beach themes that are so frequent in yacht interiors and instead makes reference to the Western lifestyle Ellard so enjoys. Inside the yacht’s open saloon, a space remarkable for its ceiling height and abundant beautifully stained oak, dark African mahogany floor and ranch-style furnishings, is an arresting picture of a horse with a shiny brown coat and handsome black mane. His name is Ichi La Roo, or Max, and he is Ellard’s favourite horse. Most days the horse will be running in a paddock or kicking up sawdust in an arena filled with cattle, country music, whistles and camera flashes. But on one particular day, he found himself trotting around a photo studio and posing for fine art photographer Constance Jaeggi. Ellard wasn’t planning on being part of the shoot but, as she shared a moment with the horse, the photographer, who also rides competitively, convinced her the image would be a keeper.

She was right. The Kiss, as they called the portrait, says a lot about the bond that exists between them. “He is a stallion, but he is so kind,” Ellard says. “I own his father [Cat Ichi], his mother [Snicker Roo], his grandmother [Meradas Dee Jay] and his great-grandmother on his mother’s side [Laney Doc].” His grandfather (High Brow Cat) was the greatest sire of all time, she adds. “I did not grow up with horses but I love horses, always did, even when I was a child.”

Ellard grew up in Winona, Mississippi. Her early professional life was in healthcare but the following years and her marriage to a like-minded husband, whom she met while attending a conference in Florida, allowed her to turn that childhood equine passion into a full-time occupation. Not only does she breed championship horses, she also rides them competitively. Her sport of choice is cutting, which she picked up in the late 1980s after building a huge ranch business with her late husband, Bill Joe Ellard.

Bill, an Arkansas native, turned his knack for selling and optimistic nature into a successful insurance business, which still operates today as the National Teachers Associates Life Insurance Company. He grew up loving to compete in rodeo. The couple moved to Dallas, Texas, in 1978 and a few years later they established EE Ranches. The first ranch they built was in Jo’s home state of Mississippi, where they raised registered horned Hereford cattle. Soon after, they began to develop their horse ranch in Pilot Point, Texas. While Bill preferred the cattle, she dedicated herself to the horses. For a time, all of Jo’s energy went into building the ranches. Once the heavy lifting was done, she started competing with the horses that they bought or bred.

Over the next 30 years EE Ranches would establish itself as a breeder of world class cutting horses. Jo went on to earn two NCHA Hall of Fame titles, one for her work establishing and developing the National Youth Cutting Horse Association and another for her achievements in the competition arena.

Cutting is as American as apple pie, enjoying a huge following in the US, and abroad, with thrilling events and lucrative rewards. The Triple Crown in Fort Worth, for example, pays out $10 million in prize money, but it does not get the national play that, say, the Kentucky Derby does. However, when Jo Ellard speaks about it, it’s easy to get drawn into the excitement.

Cutting horses have been bred by big cattle ranchers over the past couple of centuries, to help cowboys get a cow or calf out of a roaming herd. “They have to be smarter, better trained, more athletic,” Ellard says. “The cutting horse has to think on its own. All other horses in competition only do what the rider tells them to do.” In competition, the rider isn’t allowed to use reins or visible cues, and the horse is left to figure out on its own how to contain the calf, she explains.

What started as informal taunts between ranchers turned into serious competition. In 1946, the NCHA was created to oversee the competitions, formalise the rules and preserve the precious heritage of the Western way of life. The sport grew beyond the prairies because little compares to it. “There is nothing as exhilarating as being on that horse. You’re going 90 miles an hour this way, and in a split second you’re going 90 miles an hour that way,” says Ellard, who served as the NCHA’s president from 2015 to 2016. “An exhilarating ride is when there is a perfect clean cut right down the middle. It is fast and absolutely furious. And when you ride out of there, you can’t breathe.”

So, how did Ellard go from enjoying the thrill of riding to boating? It was another pastime that the Ellards shared. “We were really a good mix. Our passions were ranching and boating, and we loved it and lived it 110 per cent,” she says. Bill and Jo were at an insurance meeting in Fort Lauderdale in the mid-1970s and staying in one of the upper floor rooms of the Pier Sixty-Six hotel, when Bill expressed the desire to have his own boat one day. They had stepped on to the balcony to look at the view, which naturally included the yachts that always line the city’s docks and canals. “I’m going to have one of those,” he told her.

Not long after that they bought an 11.6 metre Chris-Craft. “His insurance business was fairly young at this point but it prospered and, as it did, the size of his boats grew,” she says. “He really, really enjoyed the boating and it is where he went to really get away.”

After a while, they decided that running the boat took away from the relaxation they craved when they went out on the water. When they bought the first of their two Hatteras yachts, they also hired their first captain. They named the boat together – Do It Now. It was the mantra of Bill Ellard’s mentor and one-time boss, the insurance maverick and self-help book author W Clement Stone. They went on to own a 19.2 metre Hatteras, which they had for many years.

After her husband died seven years ago, Ellard kept on with boating and, like he did, enjoys it for the relaxation and the break it gives her from running a huge business. “It’s the only place where I come that I don’t work,” she says. She is president of EE Ranches, which today comprises five properties in three states, chairman of the insurance company and she oversees real estate assets spread all over the country. She drives a lot, usually with her dogs riding with her. When I ask her what is the first thing she packs – a question that this practical woman finds, frankly, a bit silly – she has to think for a while. “Listen, I pack every three days, so nothing is special on any one trip.” She has many outfits – for the boardroom, or the ranch, or the competition or the boat.

Ellard enjoyed her 19.2 metre Hatteras for 20 years before she decided it was time for a new boat. She searched for many months and had seen some 15 boats from five builders when her broker mentioned a 23.2 metre Horizon for sale. She’d never heard of the brand but, after doing some research, decided to go and see for herself. She flew to Key Largo from a horse event in Kentucky to see it with her broker and captain. “I knew from within five minutes of being on the boat that I was going to own it. It was just a matter of negotiating,” she says.

First, she liked the boat’s looks. Then over time she grew to appreciate how well it performed for crew and guests alike. She calls herself a Horizon yacht owner for life. “What really clinched it is Horizon’s attention to their owners and their needs,” she says. When she decided to go on to a larger boat, after five years, the builder was very responsive. Horizon created a new model out of its existing E series to accommodate all that she wanted: an open main deck with a convivial eat-in galley – she eats out a lot, so when she’s on the boat she prefers to cook and eat on board – a master cabin with his and hers bathrooms, four full guests’ staterooms, big crew quarters and a huge open sundeck. “This is my dream boat,” she says. “It’s all I wanted in a boat.” Ellard worked with Horizon’s in-house designers and her daughter-in-law, Ornella Ellard, of Ella Italian Design, to come up with the décor. She added a finishing touch, a great big carpet that she took from under a table in her Dallas home. It was to be temporary but everyone loves it. “I think it’s found its home,” she says.

For Ellard boating is a social affair, so she chose to celebrate the arrival of the yacht with family, friends and guests of the Taiwanese yacht builder. Do It Now was christened at the Palm Beach International Boat Show last March in an elegant affair that Ellard found very moving, before she embarked on a shakedown cruise. A few weeks later she was back on board and took part in the Horizon rendezvous in the Bahamas.

Her close relationship with the builder took an interesting twist. A few years ago, she convinced Horizon that the cutting world was the perfect venue to find new clients and the yacht builder went on to sponsor one of the NCHA’s championships. As she says, horses and boats are the perfect match.