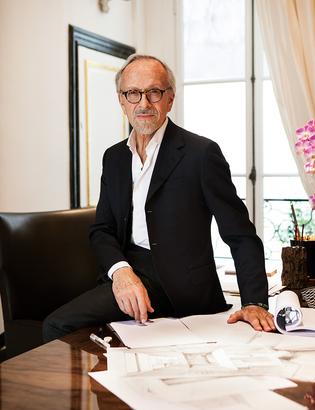 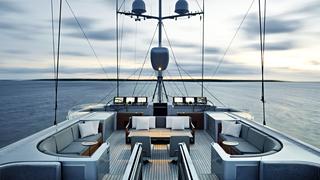 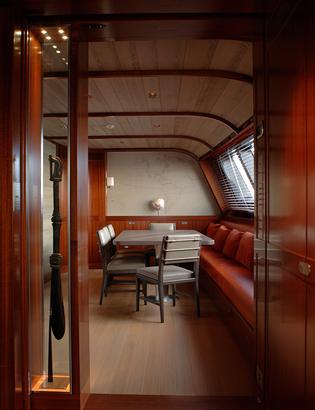 _The interior of a superyacht is even more of a design challenge than his renowned furniture, but, says Daisy Bridgewater, boats are inspiring designer Christian Liaigre to award-winning heights of bespoke brilliance. _

Bespoke furniture and interiors designer Christian Liaigre lifts an impeccably manicured hand from the smooth, curved edge of the meeting room table above his Paris design studio and makes a tiny adjustment to his tortoiseshell glasses. He is struggling with the notion of empire building. There may be a team of 20 people downstairs, drafting versions of his restrained, luxurious and highly sought-after interiors for clients from Beijing to New Delhi, but he refuses to see them as anything more than extended family.

A new furniture showroom is opening in the spring at Conduit Street in London’s Mayfair (taking the global total to 20) while a Paris-based specialist yacht studio (headed by Guillaume Rolland, his studio manager) opened its doors in December. But Liaigre insists that not one of these enterprises has anything to do with building an international brand.

“We focus on every project individually,” he tells me in his strong French accent. “Many designers want to impose their style, but we have the opposite way of thinking. This is not prêt-à-porter,” he adds, leafing through a pile of exquisitely hand-drawn pencil renderings from a recent project. “We do not mass produce.”

Liaigre’s painstakingly bespoke approach has won him high praise in the relatively new waters of luxury yacht design. Of the handful of maritime projects he has completed so far, Vertigo, the 67 metre ketch built by Alloy Yachts and launched in 2011, has won four prestigious prizes, among them Sailing Yacht of the Year at the World Superyacht Awards, while his most recent project, Seahawk, a 60 metre Perini Navi sailing yacht, claimed the holistic design gong at this year’s Showboats Design Awards. “Every time we design a boat we win many prizes,” says Liaigre, “so I suppose we are not so bad.”

For a man whose aesthetics rest in powerful understatement, it is hardly surprising that he is defiantly elusive when asked to define his style. It is, he insists, an evolution, a distillation of influences built up over many years. Growing up by the Atlantic in La Rochelle, on the west coast of France, he admits to being deeply moved by nature, with an instinctive respect for natural materials and a love of the sea. “And you can see that I like wood,” he says, gesturing to the scores of samples resting – in what could be mistaken for an art installation – against the white walls of the meeting room. “Every day I search for new ways of using and transforming wood without losing its personality.” Traditional craftsmanship is also a recurring theme in his work, with the bulk of his designs being made in a French atelier he has used for more than 30 years.

Rightly insisting that each of his projects should be treated as entirely separate from the next, and that the context of each will inform and influence its outcome, it is nonetheless possible to draw out a number of consistencies that run through all of Liaigre’s much celebrated work. His is an aesthetic of restraint, of quiet elegance, of subtle luxury, in which space, air and light are treated as the most valuable commodities. His colour palette is, almost without exception, sparse, his use of pattern non-existent. Materials, be they a tropical hardwood, a raw linen, or an Italian marble, are celebrated in their purest form. There is not a superfluous decorative element, nor a nod to passing fashion, in sight, but a simple gesture towards comfort and tranquillity.

This quietness and commitment to context translates seamlessly into the language of the luxury superyacht, where every last detail, from the handrails to the deck stairs, must be highly functional while conforming to the boat’s overall aesthetic. “When we design for a boat, the one thing we never forget is that we are on a boat,” explains Rolland, himself a life-long yachtsman. “We want to expose the structure and to express the real nature of the space that we are in, without compromising the experience of luxury and comfort.”

The sea, he suggests, can be a hostile, aggressive environment and the view one of monastic monotony. “There is less visual pollution at sea and so the focus rests on the yacht’s environment. It is a very sensual relationship: as the boat heels, the passenger must interact with the environment around them to keep themselves safe. The cabin becomes a cocoon, a nest, a place of refuge when there is too much sun and wind outside.”

Recognising that the design of a superyacht’s interior requires a peerlessly high level of service, the boat division is expanding to include a team of hand-picked designers dedicated to each individual project. Until now the projects have been managed in-house, but such is the new demand for Liaigre’s line of discreet luxury – the studio is working on refits of two luxury motor yachts – an expanded division is required. Liaigre is characteristically elusive about its exact make-up, offering only that Rolland, his trusted studio manger, will head up the division, and that they will expand and contract the team to reflect the demand of particular projects. “It is a very new decision but one we are all very excited about,” he adds. “I hope we will provide sincerity to our clients, and to show them things they are maybe not expecting.”

As a designer so intent on allowing a project’s context to inform its design, it appears that in the superyacht Liaigre has found his perfect medium. “The function of the boat gives an aesthetic you cannot escape from,” he explains. “We have to work around so many restrictions, but sometimes it is the restrictions which provide the inspiration.” Leafing through the drawings on the table, he finds a hand-drawn rendering of Seahawk’s lower deck as an example. Here an immovable staircase has been hidden from view in the lounge area by a curved glass screen, designed to house primitive artefacts collected by the owner. It at once cocoons the lounge area while providing a practical and pleasing solution to the rigid demands of the boat. It also delineates the area into clear zones for crew and guests. “Sometimes when you have to go around a problem the solution is deeper and more interesting, and this is something I find very satisfying as a designer.” He continues studying the densely wrought drawings. “The more difficult it is, the more interesting. Starting from a blank piece of paper can be incredibly difficult.”

Despite enjoying the rising tide of demand for his design work, both on land and sea, Liaigre is clear that growing too large would be to enter very dangerous waters. “I am not interested in being an international brand,” he reiterates, peering at me over his spectacles with piercing blue eyes. “The intellectual and creative work we do would be compromised if the studio became too big. I have to maintain a creative focus. This is haute couture: the couturier can only make a small number of dresses with hand-sewn diamonds. He is limited by his art and his art is made more desirable by its limitations.”

No doubt the new boat division will enable a small increase in the number of seaborne Christian Liaigre interiors but, like everything in life that is most desirable, if you want one you will probably need to put your name on the waiting list.