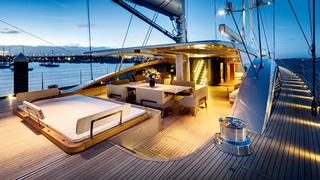 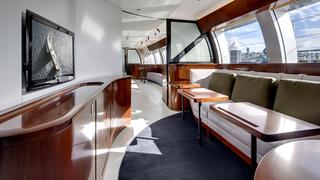 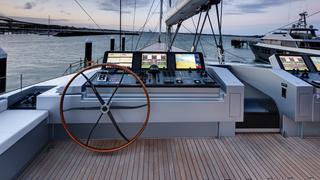 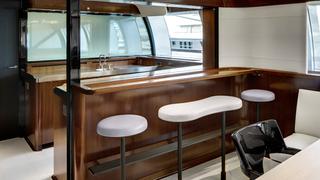 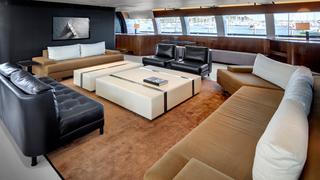 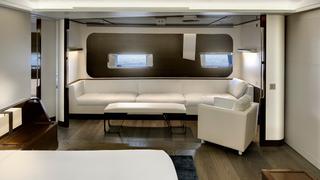 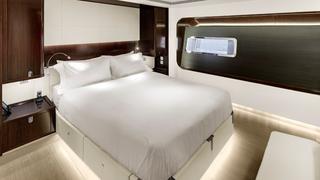 When the 18th century poet Samuel Taylor Coleridge penned his famous account of Kubla Khans stately pleasure dome, he was said to have been inspired by an opium-fuelled dream and was annoyed that distractions prevented him from fully transcribing the experience. With its dramatically arched coachroof, the 67.2 metre Vertigo could be said to resemble a 21st century pleasure dome, but, unlike Coleridges masterpiece, it is the product of some very clear thinking and no distractions at all.

Designer Philippe Briand, who discussed the design of Vertigo in detail, did the first concept drawings in 2004, initial discussions with Alloy Yachts took place the following year and the project began to gain serious momentum in 2007. Construction of the striking ketch began in 2009, and more than 800,000 man-hours later she was launched in 2011.

It is both the yards and the designers biggest project to date. At 837 gross tonnes, this is the first time Alloy Yachts has ventured over 500 gross tonnes, with the added classification burdens that come when that frontier is crossed.

Vertigo won her share of accolades when she appeared on the scene, winning Sailing Yacht of the Year in the 2012 World Superyacht Awards. She was also named sailing yacht of the year at ISS awards and was named Best in Show at the Monaco Yacht Show.

Built for extended cruising by a European couple with young children, Vertigo combines six-star luxury accommodation with serious performance and plenty of energy-sapping sporting equipment to keep guests of all ages fit and entertained anywhere in the world. Vertigo is also available for charter.

With a reputation for sleek, low-profile contemporary designs, Briand's lines and proportions are superbly balanced. The superstructure is a sculpted dome arcing across the space between the two masts, with the line of the flybridge extending aft to a tapered point like a speed blur. Supported by delicate mullions, the whole superstructure appears to float on glass. Painted in Alexseal metallic silver over the jet black hull, the domes sense of weightlessness is emphasised. The total effect is of a low-slung profile, streamlined, aerodynamic, powerful.

Internal aesthetics, functionality and comfort were entrusted to the renowned French design house of Christian Liaigre the first time he has undertaken a superyacht project from the outset.

The task of executing all the elements, finding engineering solutions and translating the dream into reality fell to the yard, while the rig and sail programmes were handled by Southern Spars and North Sails, respectively.

Towering above deck, the nearly equal length carbon-fibre masts (67.9 metres and 62.4 metres) support a 5,037 square metre sailplan to maximise performance. Constrained by a draught limit of 5.05 metres, the underwater profile comprises a fin keel with a daggerboard that projects down through the keel and increases the draught to 9.1 metres.

As a sailing command centre, the flybridge ensures outstanding visibility all round. For docking manoeuvres, bow and stern thruster and throttle controls are tucked discreetly into the outermost edges of the helm stations to give the helmsman unrestricted views forward and aft. The twin helm stations are neatly laid out with pushbutton sail controls commanding no fewer than 16 captive winches, custom built by Alloy Yachts.

Most yachts of this size would resort to firing up the twin engines and motoring when the breeze drops much below 10 knots. However, with this sail area and the attention paid to creating a performance-oriented hull, a gentle breeze translates into a 12 to 14 knot reach with all sails flying  ensuring a glorious experience for everyone.

In tropical climates and gentle to moderate breezes, the flybridge is a superb area, with twin helm stations forward, large sunbeds aft, curved settees around the sides and a central table and chairs. Immediate catering needs are met with a portside barbecue and starboardside fridge, icemaker and sink.

Protection from the elements is ensured by a clever glass wind shield that rises from the back of the aft-facing settee at the table. Further protection is afforded by a dodger that lifts up and over the helm stations, while two bimini covers can also be erected. With one bimini deployed, it can be slid forward or back to provide shade exactly where you want it, while allowing the sunlovers to bask. With both up at once, the entire seating area is shaded.

The aft cockpit is a great refuge in all weathers. The environment can be controlled by side windows sliding up and down, a rear curtain that pulls up out of the spa-pool surround and connects with the trailing edge of the flybridge overhang, and with a pair of louvres set into the roof that open and shut at the touch of a button.

For Vertigo's interior, the brief was distilled to three words: Urban at Sea. The owner had seen some of Liaigre's commercial work in New York hotels and on Rupert Murdoch's 56 metre Perini NaviRosehearty, and was impressed by the look. Briand's close relationship with the interior designer was helpful in bringing Liaigre's studio into the project from the outset, as opposed to furnishing and styling existing spaces. The result was an amazing collaboration between the design studio and the yard as they negotiated around structural issues to achieve the overall result.

Glimpses of the full longitudinal expanse are afforded with sightlines running all the way from the twin cockpit entrances aft to the raked windscreen enclosing the wheelhouse forward. The degree of separation between the various spaces can be orchestrated by glass panels and doors equipped with liquid crystal displays that can be rendered transparent or opaque at the flick of a switch.

Throughout the interior, the furnishing and finishes are spare and simple. The treatment is notable for its lack of artwork apart from two small sculptures in strategically placed alcoves. The boat speaks for itself, says project manager Andrew Senn. We appreciate the effort and work that has gone into creating an interior of this quality. Why hide it behind a piece of art when the boat itself is a piece of art?

A piece of art, yet one that must function efficiently at sea in all conditions and serve a wide range of purposes.

For those who want more action than a snooze on the sofa, there are plenty of more energetic entertainments on offer. For exploring, there is the limousine tender in the aft garage and two other six metre tenders in the forward garage, plus sailing dinghies, kayaks and so on.

In addition, the midships sections of the hull open up on both sides to create additional boarding platforms and beaches for all kinds of water-borne activities  diving, snorkelling, water-skiing, boardsailing or swimming. This midships lazarette has been dubbed the midarette

Effectively, the whole idea is that this is like a watersports club, says Senn. Guests can come down here and choose any of the toys on the racks. Opposite the watersports club is the gymnasium, where guests can work up a sweat and an appetite, with the water lapping alongside and fresh air blowing through.

Through her size and looks alone, Vertigo will always be a head-turner. But she is much more than that. The collaboration between owner, designers and yard has created an exceptional superyacht, exuding outstanding quality in every detail of her construction. As a vehicle for experiences and adventure, Vertigo is exceptionally well equipped in every sense, a stately pleasure dome worthy of Kubla Khan's approval.

Wisp: a winning combination of superyachting and sailing