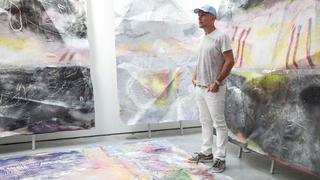 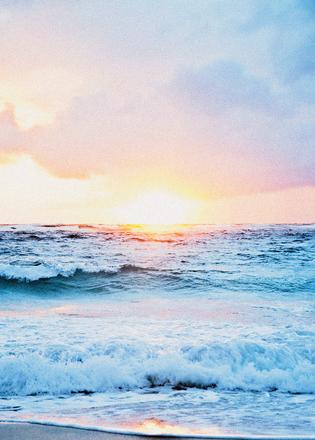 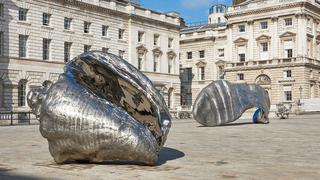 British artist Marc Quinn’s work celebrates the ocean, even when it’s in “captivity” in our cities. Ticky Hedley-Dent reports...

Marc Quinn is standing by a half-finished, pink and silver spray-painted, aluminium-backed work in his Hoxton studio in the East End of London, eloquently explaining the creative process behind his recent show The Toxic Sublime at White Cube. The British artist, who came to prominence in the 1990s with Self, a sculpture made with his own blood, and Alison Lapper Pregnant, the beautiful, controversial sculpture of a disabled woman for the fourth plinth in Trafalgar Square, has a new subject between his teeth, human beings’ complex relationship with their environment.

Quinn's recent sea-inspired artwork is made up of two halves: The Toxic Sublime hybrid painting/sculptures and the stainless steel sculptures, Frozen Waves and Broken Sublime, all of which have their origins in the Caribbean, where Quinn has a house. “I spend three months a year looking at the ocean,” he says. “It is the blood of the planet.” But, typically, he was not going to come back with a traditional seascape; as he points out, one can’t be Turner in the age of global warming and so he chose to focus on the biggest threats facing the world's oceans. “These paintings are viewed from an urban perspective. They are paintings of the sea by someone who lives in the city. I think you need the tension between the two.”

All of The Toxic Sublime paintings have the same generic Caribbean sunset spot as their base. “I spray paint it, which is obviously an urban paint, and start by layering it. Once I’ve done that I sand it down. Then I spray through bits of flotsam and jetsam, bits of shit that come off boats. I spray through it so you get a ghost image of the stuff.” All this is done over crumpled plastic to give it a distressed finish. “Then I take it on to the street and get all the textures of manhole covers, which is basically water in captivity, water controlled by man, but ultimately connected to the ocean.”

Next, Quinn puts on some steel-toe-capped boots and gets physical: “I have to kick them to shape the aluminium.” The result is a very three-dimensional painting. “You’ve got a painting that is a painting of the sublime. It’s a new sublime, it’s not the one of pure nature, it’s man-shaped nature,” says the softly spoken Quinn, who has an intellectual approach to his work, every idea meticulously thought out.

Quinn became a beachcomber to find the perfect shell fragments, because he needed ones that could stand up on their own as he copied their forms for the sculptures. “I was walking along the beach and I looked at it and thought it was interesting – it’s like a sculpture of a wave by the action of the wave. It’s an unwitting self-portrait of the ocean, in a way.”

These stunning sculptures look like molten metal and are shiny on the front and rough on the back, just like a sea-worn shell. “The front is something you could dive through and go to another dimension,” jokes Quinn. To make these he used a 3D printer, the polystyrene printouts are put together and sent to the foundry where they are made with metal; moulded, polished and brushed. The large sculptures take more than a year to make and are highly polished to get the wondrous finish that was shown off so well when they were recently displayed in the courtyard of Somerset House in central London, where the blue sky and surrounding architecture were reflected in them.

Quinn continues to explore the environment and our relationship with it, and is working on some paintings using bits of coral and sea debris. Although his work is so diverse, Quinn identifies a theme of fragility running through it. “You could say the earlier flower sculptures, which are sculptures of flowers painted with car paint, is a precursor to these ones.”

Of course Quinn will always be famous for his more controversial works such as Self, Siren (the 18kt gold statue of Kate Moss in a contorted yoga pose which made our list of the top six real gold luxury objects for your yacht) and Alison Lapper Pregnant. And, indeed, it seems he will always be known as a YBA – Young British Artist – the name coined for a group of provocative artists including Damien Hirst and Tracey Emin, who were collected by Charles Saatchi and dominated the art scene in the 1990s. Quinn thinks the name has stuck because it’s easy journalism, but adds that “it’s good to be called young when you’re 51! I’m forever young”.

There hasn’t been such an explosive artistic movement since. “It’s because you have to have particular conditions for that to happen. There have been interesting artists but there hasn’t been a movement like that, although there has in other countries. So it moves around. We’ve had Chinese art and Indian art. At the beginning of the last century it was Paris and then New York with abstract expressionism and pop, then Britain during YBA. You can’t tell where the next place will be.”

Quinn isn’t someone who looks backwards. “I’m a positive person,” he says. His favourite piece of work is always the next one. He may not be that young but he still has that youthful energy and enthusiasm about his work. “I’m riding the wave,” he says.

Hula: The artist who uses a surfboard as a studio

How to turn your superyacht view into fine art