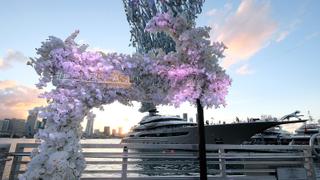 Long a mecca for superyachts and their owners, in recent years Miami has become home to some of the most exciting contemporary art in the United States thanks to the annual Art Basel Miami Beach fair. The event draws people from all over the world and an estimated 83,000 people visited the displays at the renovated Miami Beach Convention Center this year. Art Basel Miami attracts art collectors, certainly, but also a bevy of celebrities – among the headliners this year were Bono, in town to support his AIDS charity, Noami Campbell and Leonardo DiCaprio.

Since its first Miami edition in 2002, the fair has spilled to a multitude of satellite events, galleries, chic hotels and yachts. So how do you compete for attention with all the happenings around the city? With a 95 metre superyacht, a celebrity DJ (DJ Questlove - 3.5 million followers on Twitter) and a grand-scale art installation above the city’s superyacht marina, of course.

That’s exactly what Four Seasons Resorts & Hotels did for its third ‘Pop Down’. The event (a twist on Pop Up) is a fantastic marketing tool for the brand, which is on an expansion path, celebrating everything Four Seasons through carefully curated events in unexpected locations. Art was front and centre for this edition, featuring chefs and bartenders from 13 of the Four Seasons hotels around the world.

LA artist Patrick Shearn of Poetic Kinetics was commissioned to create a unique piece for the December 8 happening. The art work, made of holographic film strips expertly knotted by hand to a monofilament net and suspended to cables, morphed with the wind, mimicking the movement of shifting schools of silver fish or flocks of birds. The piece, named Glass Horizon, stretched several yards from the entrance of Island Gardens Deep Harbour nearly to the bow of the spectacular host yacht - Kismet, a 2015 World Superyacht Award winner.

Kismet was built by German yard Lürssen in 2014 to an Espen Oeino design. Available for select charters (for around $1 million a week), Kismet became especially hashtag worthy when Beyoncé and Jay-Z vacationed on board in Italy last summer. A guest at the event talked about her own encounter with Beyoncé while sipping from a glowing glass goblet. The cocktail called Luce (or light), a blend of grappa, bergamot liqueur, celery and lemon sherbet, was a creation of Valentino Longo, the head bartender at the Four Seasons Hotel at The Surf Club, on Miami Beach.

On another deck, the yacht’s owner, Shahid Khan, amiably greeted guests to whom he had opened up all decks. “If you’ve gone to Antarctica twice, you’ve gone there one too many times,” he joked when asked about his favourite places to cruise. He loves Toronto where he goes often for business, he said. His affection for the city led him to take a step into the hospitality world he’d never anticipated making. In 2016 he bought the Four Seasons Resort Toronto, a five-star hotel in the heart of the city and considered the global brand’s flagship property.

The chefs, among them Daniel Boulud and Mauro Colagreco (who is opening his first US restaurant in Palm Beach in collaboration with the Four Seasons Palm Beach), seemed to enjoy themselves as much as the guests, dishing out spectacular food including delicate warm parmesan and mushroom tarts with shavings of truffle, pumpkin and hazelnut ravioli and playful desserts. One was an homage to Andy Warhol served in small Campbell cans by Angel Betancourt of the Ocean Club (the Four Seasons in the Bahamas). Another, by pastry chef Chris Ford of the Beverly Wilshire Four Seasons, was a one-bite blast of flavour served on a paint brush. Diogo Lopes of the Four Seasons in Lisbon invited guests to paint their own desserts with edible food colouring. It was, after all, Art Basel.

Miami downtime: where to relax after Art Basel