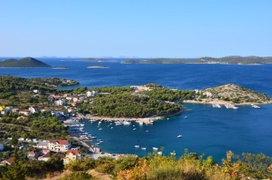 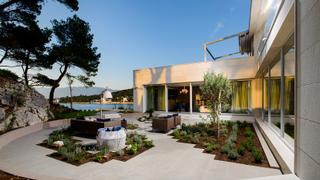 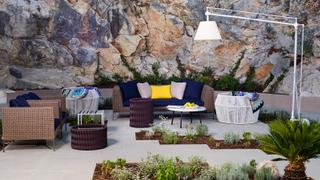 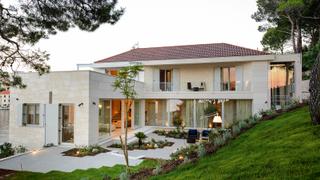 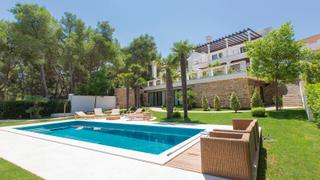 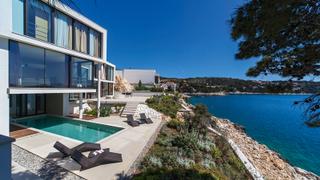 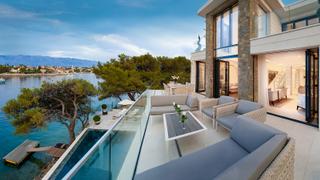 Property of the month: A Dalmatian Coast new build boasting the best of Croatia

Second home hunters will find stunning views and value among the central islands of Croatia and this new build that uses historic local white limestone is one of the many attractions to be found on Brač, says Francesca Steele...

Croatia’s constellation of islands is perfect for sailing in beautifully clear water and sipping cocktails in the sun. Its popularity with island hopping tourists and house hunters has grown over the past two decades, presenting a good value alternative to traditional Mediterranean sunspots. Even grand villas in the islands off the coast of Croatia’s second largest city, Split, rarely cost more than €4 million.

On Hvar, the most expensive island, you can party until dawn surrounded by 13th century walls and gothic architecture. Bernie Ecclestone is a regular. Brač is more low-key, with a climate ideal for watersports off the stunning Zlatni Rat beach at Bol. There are coastal bars and restaurants at Supetar and, inland, Illyrian fortresses, great hiking spots and impressive piles of limestone, built up over centuries by locals clearing the land.

Marko Ljutic, from Dream Estates Croatia, a Savills associate, says: “In the last five years the real estate market on Brač has been moving upwards with an average annual price rise of five per cent. There is high demand for luxury apartments and villas.” While the process can take time, life moving slowly in Croatia is surely part of its charm.

The small village of Povlja, in the northeastern corner of the island of Brač, has a deep natural harbour once used by Roman ships. Today you are more likely to see gondolas, chartered speedboats and 30 metre yachts, carrying families looking to enjoy the long promenades, cultural sites, and peace and quiet.

In some Croatian towns including Dubrovnik, a UNESCO World Heritage Centre, traditional Dalmatian stone cottages have long been the most popular property purchase. Recently loosened laws, however, have led to a surge in beautifully designed new builds, particularly on Brač. They utilise local materials but are all sharp lines, clean palettes and spectacular waterfront views.

Villa Papilio, in Povlja, is one such new build. The four bedroom villa, priced at €3.7 million, is built across three levels in an L-shape designed to fit snugly into the cove. The L wraps around a circular terrace and has complete privacy from the outside world and wonderful views of the sea. The south facing wall has large sliding glass doors that open on to the garden and let lots of sun into the villa.

Agent Marko Ljutic says that the “contemporary interpretation of traditional design” makes this house a unique property on the market. It is made of world renowned Brač limestone, also used to construct the White House in Washington. This strong, bright white stone was first quarried by invading Romans in 167 BC and transported to the mainland, where it was used to build palaces and mansions, including the much visited Diocletian’s Palace. Residents of Brač can see Roman and Illyrian artefacts at a hilltop museum in the small town of Skrip.

Inside Villa Papilio, the floors are made of larch, a hard-wearing wood often used in boat building. There are butterfly motifs on the walls to reflect the property’s name: papilio is the Latin word for butterfly. In keeping with the modern slant on traditional design, there is a lift between all three floors and a sauna in the basement.

Outside, a heated pool and a clean-lined terrace continue the contemporary theme, but it is the natural landscape that makes the garden stand out from other properties. Hydrangea and lavender bushes dot the walls and stairs from the pool to the shore, while ivy cascades down the walls. Lemon trees and pines create shade and privacy.

The owners are Russians, who spend the summers here. They say it would be possible to build a private dock for the property, although there are also moorings in the village and marinas at Milna Bay on the southwestern tip of the island. In Split there is a wider choice of marinas and plenty of restaurants and bars. Villa Papilio’s owners like to eat locally at Konoba Kala, a family-run restaurant on the harbour at Povlja, serving up moules frites and grilled shrimp.

Villa Papilio is for sale with Dream Estates Croatia, dreamcroatia.com

The best of the rest

This home on the island of Ciovo has a billiard room, spa and hammam. High spec technical additions include built-in speakers in every room.

Seven villas and six apartments with their own pools, gyms and saunas, plus access to a private beach, at Primošten, very close to Split airport.

Villa Ivy is a five bedroom house near the village of Sumartin on Brač, with a gym, sauna, steam room and wine cellar. It also has a private mooring.

Property of the month: Palm Beach's most expensive ever home listing

For sale: The luxury homes with hotel amenities