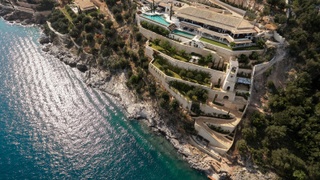 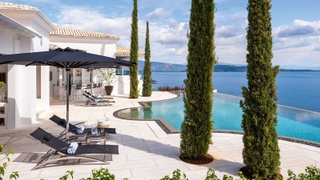 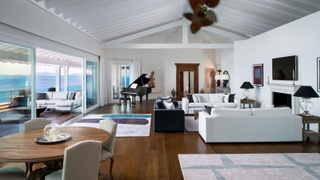 Villa with a view: A clifftop hideaway perched 30m above the sea

Nestled on a northeastern Corfu clifftop and with direct access to the shore via a tower lift, Grand Marine is worthy of James Bond, says Sophia Wilson

Sitting more than 30 metres above sea level, this seven-bedroom mansion has panoramic views of the Corfu Channel and Albania’s ancient city of Butrint. Completed in 2018, Grand Marine’s contemporary design – including a vast glass balcony and vaulted ceilings – is scattered with traditional artefacts from Morocco and India.

“The property boasts attention to detail while maintaining respect for Corfu’s architectural heritage,” says Savvas Savvaidis, managing partner of Greece Sotheby’s International Realty. “The most astounding feature is the sense of infinity, feeling at one with the sea as if floating in a boat.”

All of the bedrooms feature a subtle and neutral palette that draws the eye out to the Ionian Sea below. There are two master suites with opulent bathrooms, which include walk-in showers, and separate dressing rooms. The upper master bedroom also has access to a landscaped garden with a secluded spa pool in a thatched pergola. Two further bedrooms are part of an independent guest suite, with a separate entrance, kitchen and living area and a private terrace overlooking the estate’s lawns.

The property’s elevated position affords privacy but its sea terrace, with a deck for mooring, is easily accessible via an outdoor lift. In front of the main house there is a split-level freshwater pool with a waterfall, and the home has hotel-style amenities such as a mosaic-tiled hammam, a mirrored gym and a yoga pergola.

Greece’s property market was savaged by the government debt crisis of 2010 but there are signs that it’s bouncing back. “Since 2014, Greece has had a gradual economic recovery with a parallel boost in the confidence of foreign buyers,” says Savvaidis. “The sun, the sea and the friendliness of the local people provide the foundation for an attractive luxury real estate market.”

Gouvia Marina, which can accommodate yachts up to 80m, is less than 6nm away, and Corfu International Airport, which has private-jet facilities, is 10 minutes away by boat. This patch of the north-east coast is popular with Brits, and favoured waterside hangouts include nearby Fagopoteion and Kouloura. Less than 1km away, the quiet hamlet of Kaminaki has a scenic pebble beach, and Kaminaki Taverna serves up freshly caught sea bass and moussaka.

Villa with a View: Inside Antigua's Half Moon Bay Residences

Villa with a view: Villa Puddinga for sale on Portofino's seafront