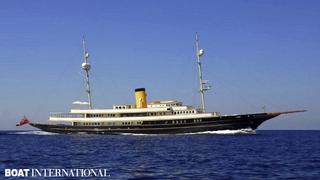 The sale of Sunseeker's 26.84 metre motor yacht Gatsby marks a significant 300 sales recorded so far this year, a major advance on 2013 when this point was not reached until December.

2013 went on to post a total of 355 sales - a record year since the 2008 global financial meltdown. With a full fourth quarter - always a fertile sales period - ahead, there is no reason to doubt that 2014 will prove to be another record year.

Encouragingly, the past nine months have seen the sale of some particularly large superyachts, headed by the 90.1 metre Nero while not far behind were Pride Yachts' 88.8 metre Illusion and Lurssen's 88 metre Quatroelle. Other notable sales included Royal Denship's 79 metre Pegasus V and Codecasa's 63.7 metre Sokar.

A further noteworthy point is the number of older yachts sold, clearing the inventory for more recent additions to the market. Sales in this category included the 44 year old 69 metre Sarsen, Feadship's 1989 41 metre Odyssey and the 1973 expedition yacht from Davie Shipbuilding, the 39.6 metre Phoenix.

Although the news is very positive so far, Toby Maclaurin at Ocean Independence sounds a note of caution, saying, 'I can well believe that the volume of deals is comfortably up. Indeed our own figures show Ocean Independence further ahead of the market - in terms of volume. To balance the joy of increased activity we have to also say that selling prices are not as yet recovering at the same rate, buyers are well educated and continue to push very hard for maximum value to them in each and every transaction.'