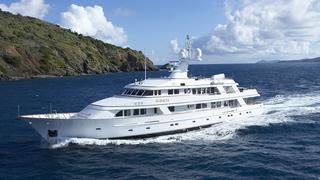 The 48.5 metre motor yacht Audacia, listed for sale by Whit Kirtland at Bradford Marine Yacht Sales, has been sold in an in-house deal.

Audacia was built by Dutch superyacht yard Feadship to ABS class and launched in 1987 with an interior refit in 2007. She had a further major refit in 2011 at the Pendennis yard when the stern was completely restyled by Joanne De Guardiola Design and the beach deck was extended by two metres, taking her length to 48.5 metres. The new look was so successful that US magazine Architectural Digest published a special feature on her.

MCA compliant, she has spacious, flexible and well-appointed living areas in beautiful honey-coloured teak panelling, and accommodation for up to 12 guests in six cabins consisting of a master suite on the main deck with his and her bathrooms, a full beam VIP suite and two doubles and twins, all with en suite bathroom facilities.

The upper and main saloons have received new ceilings and lighting systems, including a disco system in the upper saloon, as well as contemporary furnishings to complement the teak panelling. Large plasma television screens and new stereo systems are located in each saloon

Al fresco living is available in excellent shaded and open deck spaces, and she has the highest possible specification for both entertainment and engineering systems.

Twin 1,000hp Caterpillar engines give her a range of over 4,000 nautical miles at 10 knots and she is fitted with zero speed stabilisers.