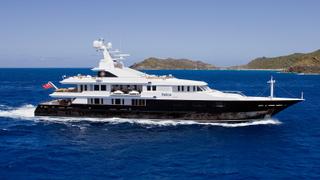 The 59 metre motor yacht Helios, jointly listed for sale by Y.CO and Edmiston & Company, has been sold with Edmiston introducing the buyer.

Designed by the A Group, Helios was built in steel and aluminium by the Dutch yard Oceanco to Lloyds class and MCA coded with delivery in 2001. An extensive refit in 2007/2008 included a complete overhaul of the saloon/cinema, master suite and guest cabins, along with full remodelling of the sun deck, galley and lazarette, mechanical systems upgrades and a complete paint job.

An interior by Marc Michaels in light, neutral shades and pale woods accommodates up to 14 guests in seven cabins comprising a master suite, four doubles and two twins, all with entertainment centres, television screens and en suite bathroom facilities. There are also quarters for up to 18 crew.

The large main saloon has a lounge area with comfortable seating a bar and an entertainment centre including a large plasma television screen and a Kaleidescape server offering audio and visual services throughout the guest areas.

However, the focus of attention is the vast sun deck which offers relaxation during the day on sun pads, a Jacuzzi spa tub and a bar. At night this area turns into a party deck, with an outdoor cinema, disco lights and a foam machine.

Twin 1,640hp Caterpillar diesel engines give her a cruising speed of 13.5 knots and a range of 6,000 nautical miles while, for added comfort, she is fitted with Quantum zero speed stabilisers.