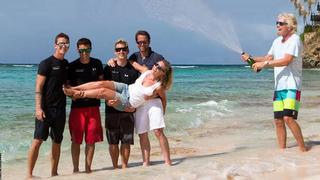 The internet is abuzz with news of Richard Branson rescuing Ben Ainslie on his honeymoon but, as we reported earlier, it wasn't so much a rescue as the newlyweds being picked up because the mainsail had jammed and the pair didn't have enough hands to fix it themselves.

In response to this development in the story, Boat International has compiled a list of six genuine celebrity sea rescues. Some of these famous faces were rescued from boats, one was saved from drowning and another rescued passengers from a sinking superyacht. And, of course, no sea rescue feature would be complete without mentioning Dick Van Dyke's infamous rescue by porpoises...

Popstar Kelly Rowland was rescued after 12 hours lost at sea in July 2013. The captain of the private vessel had been following a whale-watching boat off the coast of Cape Cod when he lost sight of her and became disorientated. This celebrity was rescued when a commercial towboat operator escorted the boat back to Provincetown in Cape Cod.

“It was pretty rocky out there, from what they told me,” said Noah Santos, captain of the towboat that escorted the vessel back to land. “They were just a little shaken up. They were okay though, and just very happy to see .”

Actor Chris Hemsworth and his family were involved in a celebrity sea rescue when their fishing catamaran ran aground off the coast of Canary Island La Gomera in November 2013. Two rescue boats and a helicopter were sent to take the Thor star and the other passengers, including his pregnant wife and 18-month-old daughter, to shore.

Hemsworth was filming Heart of the Sea, a film about a whaling ship that sinks in the Pacific Ocean in 1820, at the time. It’s claimed the catamaran was chartered by the film’s production company to transport the group to Playa de Santiago on the south of La Gomera.

Music mogul Simon Cowell conducted a celebrity sea rescue in August 2012 when 43 metre Baglietto Sofia 3 began sinking. The superyacht, with nine passengers on board, was struck by waves from behind and took on water aft. Cowell received a Mayday distress call and directed the captain and crew of chartered 60 metre CMN superyacht Slipstream to assist.

“He only did what any good person would do,” said Pop star Sinitta, who was on board during the sea rescue. “If his yacht was in trouble he would want someone to come to his rescue. It was just lucky they happened to be close by.”

Ex-BBC journalist and TV presenter Michael Buerk was rescued from 13m yacht Samphire of Poole after her engine failed in July 2008. Buerk was sailing near Lymington in the Solent in the UK when the RNLI rescued him.

The irony of Buerk being the celebrity of his own sea rescue wasn't lost on him: he used to present dramatic recreations of rescues on TV show "999" almost 20 years previously. "It was certainly a surprise to see Michael on board a vessel we were helping - but an altogether pleasant surprise," said Helmsman Phil Baker at Lymington lifeboat station.

Rapper Sean Combs – also known as P Diddy or Puff Daddy - was rescued by Welsh TV presenter Steve Jones when he began drowning in the sea at St Tropez in 2002. According to Jones, who told the story on a 2007 episode of TV show "Would I Lie To You?", Diddy dove into the sea from the yacht they were both on. When it became clear P Diddy couldn’t swim, Jones staged his own celebrity sea rescue by diving in after him and helping Puffy swim back to the boat.

The strangest celebrity sea rescue has to be this one. In 2010, actor Dick Van Dyke said he fell asleep on a surfboard and when he woke up, he couldn’t see land.

“I started paddling with the swells and I started seeing fins swimming around me and I thought, “I’m dead”,” he said. “They turned out to be porpoises and they pushed me all the way to shore. I’m not kidding.”