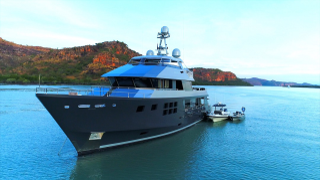 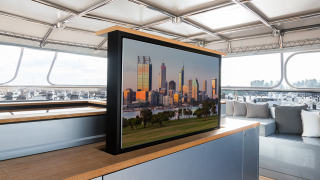 The 34.18 metre motor yacht Akiko has been jointly listed for sale by Yachtzoo and Burgess.

Built by Alloy Yachts to Lloyd’s Registry standards and MCA compliant, Akiko was launched in 2007 and went on to pick up five major honours at the 2008 World Superyacht Awards. Her aluminium hull and superstructure encompass a total interior volume of 281GT, while the exterior styling and naval architecture were created by Canadian designer Gregory C. Marshall.

Her accommodation sleeps up to eight guests in four cabins, comprised of a master suite, a VIP double room and two twin cabins. Meanwhile, the crew quarters allow for a staff of up to six people. Formerly offered for charter in Fiji, Akiko features a covered sundeck with room for al fresco dining.

Power comes from a pair of 425hp Caterpillar 3406E diesel engines which can deliver a top speed of 13.5 knots. When trimmed back to her cruising speed of 10 knots, Akiko boasts a maximum range of 4,300 nautical miles thanks to her total fuel capacity of 34,020 litres.

_Get the latest issue of BOAT International sent straight to your door: _