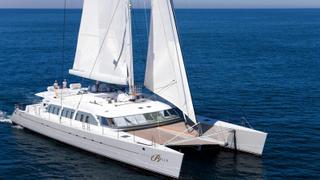 The 32 metre catamaran sailing yacht Necker Belle, has been sold by Denison Yachting in an in-house deal.

Built by French superyacht yard CMN, she was launched in 2003 and is RINA classed and MCA compliant. In 2009, she was completely rebuilt at Azzura Marine in Australia, and she received further upgrades in 2013, including new main engines, generators and sails. Accommodation is for 10 guests in four staterooms consisting of a master suite, a double and two convertible twins, plus she offers a double sofa bed in the main saloon for additional sleeping options. For more hardy guests, the two aft deck sun pads can be transformed into outdoor berths with a removable tent-style structure to protect them from the elements.

This yacht for sale reaches top speeds of 20 knots under sail and 14 knots under power. Her new twin 480hp Caterpillar engines give her a range of 1,000 nautical miles at 12 knots under power. A finalist in the 2010 World Superyacht Awards in the ‘Best Refitted Yacht’ category, she received a special Judges' commendation award.