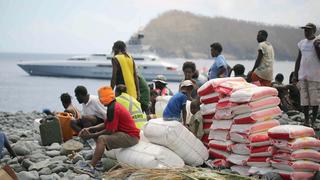 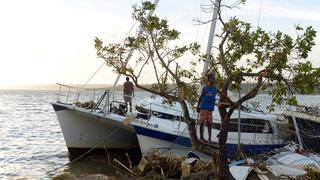 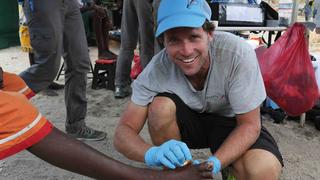 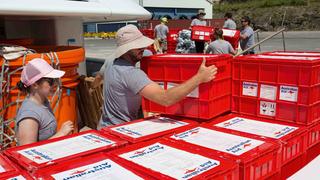 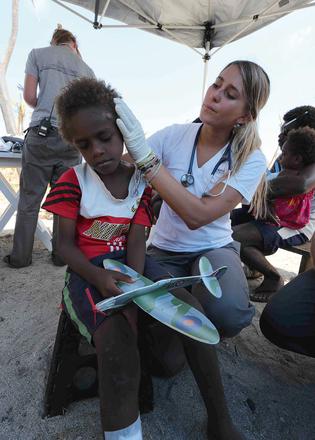 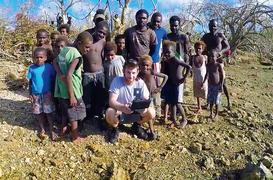 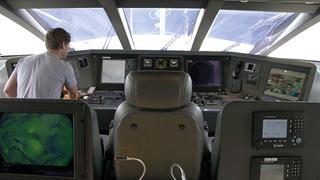 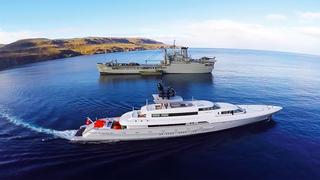 No one buys a superyacht to save the world. But their speed and range, significant hold-capacity and access-all-areas capability actually make big yachts the perfect first-responders in an emergency situation. A growing number of owners are beginning to appreciate this, with the result that it’s not unusual to witness scenes of devastation with a yacht anchored in the distance. Far from disaster tourism – these yachts are helping to save lives.

It was early March just off Pohnpei, one of the four main islands of Micronesia, and Mike Gregory and his crew were watching the weather. “As mariners we’re constantly looking out for things,” says Gregory, skipper of 73 metre yacht Dragonfly. “We’d seen the storm developing in the southern hemisphere and were watching it with trepidation.”

Gregory felt compelled to do something. “I put in a phone call to the owner and got the nod to deploy down to cyclone-devastated Vanuatu to help out. We spent the next day loading up supplies from the local hardware store in Pohnpei and got what we could in the way of food and freshwater tanks, and off we went.” Everything, including fuel, was paid for by the owner and suddenly a 73 metre, nine-cabin superyacht had become a rapid response, emergency relief vessel.

Built by Silver Yachts in 2009, Dragonfly was hailed as the fastest, most fuel-efficient long-range cruising superyacht on the water. She has a transatlantic range at 22 knots and has a fuel consumption of only 360 litres per hour at 18 knots, extending her range to 4,500 nautical miles.

Early on 21 March, having covered nearly 1,600 nautical miles in three and half days, she arrived off Port Vila, the harbour of which had been destroyed by the cyclone. One of Gregory's crew is a doctor - “she's also one of our stewardesses” - and five of them are trained emergency medical technicians. At Pohnpei they had been joined by “five guys from our shoreside security team, some ex-Navy seals”, who also had medical training.

Aid from superyachts can come in many forms

Through the yachting services company he had previously used in Vanuatu, Gregory made contact with the local government’s National Disaster Management Office. He explained that on board he had 10 medics, a desalination plant and 37 1,600-litre tanks and pumps to store and deliver water, and asked to be deployed to the hardest-hit area. “They scratched their heads a little,” he says, “and then sent us north to Shefa province.”

The scenes that greeted them there were appalling. “There was pretty much 100 per cent damage to all structures and 80 to 100 per cent destruction. Most of the trees were destroyed. There was zero shade and no shelter, so exposure was a big problem, especially for islanders with no access to fresh water, so dehydration was becoming a problem.”

During the next week, they delivered more than 60,000 litres of fresh water and about six tonnes of food. “We saw and treated over 250 casualties,” says Gregory. “We arranged and facilitated three medical evacuations by helicopter, cleared numerous helicopter-landing zones and access roads and delivered and built shelter in several villages." It was work that did not go unnoticed. As Joe Natuman, Vanuatu’s prime minister, said as the ship prepared to leave: “I want to thank Dragonfly for assisting us. We didn’t expect it but we really appreciate what they – the captain, the crew and the owners – did, coming and organising this generous assistance to help our people recover.”

Dragonfly was not the only superyacht in the area. Also helping out was the 51 metre support vessel Umbra, which was undergoing work in Auckland, New Zealand, when the cyclone hit. Umbra was among several yachts mobilised by Yacht Aid Global, a US charity set up by another captain, Mark Drewelow. Its motto is “to change the world without changing course” and Drewelow was able to divert a couple of the boats on its books to the disaster area.

Drewelow spent a decade as captain of 32.6m Dorothea, which has been described as the original superyacht and on which he circumnavigated the globe before setting up the San Diego-based yacht services agency C2C. “I have always been concerned with corporate social responsibility and how I could give back to the communities I’d visited over the years,” he says. “And so I thought, why not use the client base of C2C to move supplies and medical aid around the world and into isolated coast communities as the boats travel.”

The first boat it mobilised was a 45 metre ketch, Timoneer, which belonged to the late Georgia Gosnell. In November 2006 “she was southbound from San Diego to Costa Rica”, remembers Drewelow, “and we approached the skipper about taking supplies, and he agreed. It was a very smooth transaction. One of our objectives is to make it as streamlined as possible for the vessel so there’s no disruption to their schedules.” All the paperwork relating to customs and duties is taken care of, as are arrangements for the loading and unloading of goods. “It’s all designed to be minimally invasive.”

Since then Timoneer has made regular philanthropic missions, delivering goods – often medical supplies as basic as bandages and latex gloves, or pencils for schools – particularly to countries in the Caribbean and remote parts of Mexico and Central America, not least the San Blas Islands off Panama. This archipelago of more than 350 mostly uninhabited islets has no sources of fresh water, so drums of water for washing and irrigation, and bottled drinking water, have to be shipped in, making it more precious than dollars to the 50,000 or so people who call it home.

As Gosnell told The Wall Street Journal in 2010: “We enjoy going to far-off places and some of what you see makes you feel it’s your responsibility to help the people in those communities. When you’re sailing to these places, you’re using their shore and walking on their sand. What we’re doing is an easy way of giving something back.”

Sir Richard Branson is another owner with this philosophy. His 32 metre catamaran Necker Belle was used to deliver aid in the Caribbean after Hurricane Gonzalo struck last October. A Yacht Aid Global (YAG) volunteer had sought out yachts heading south at the Fort Lauderdale International Boat Show that year, to see if they could assist in the relief effort to St Martin/Saint Maarten and Antigua.

While Panama’s Islas Secas also suffer from a lack of water (the clue is in their name), they have also benefited from YAG-facilitated trips made by the 49 metre WestportHarmony, bringing water and supplies from Panama City, 62.6 metre Lady Lola and 37 metre Steadfast.

YAG has also worked with a handful of distinguished expedition yachts, among them the 59 metre Huisman-built Seawolf, 63 metre SuRi and Big Fish, a 45 metre long-range yacht built in 2010 by McMullen & Wing to a spec by designer Greg Marshall that specifically incorporates capacious stores for fuel, water, consumables (she has 11 Hoshizaki fridge-freezers in her galley), specialised cargo and supplies for just about any eventuality. This enabled her to deliver two tonnes of aid – from portable generators and mattresses, to food, clothing, toys, tools and medical supplies – to Lautoka in Fiji in the wake of Cyclone Evan in December 2012. (YAG has sent yachts as far afield as Easter Island and Komodo in Indonesia.) Two years earlier, en route from Fort Lauderdale to Alaska, she had been diverted to the village of San Juan Bautista on Robinson Crusoe island, off the coast of Chile, to help in the aftermath of the tsunami that struck the island. On the initiative of its crew, under captain Winston Joyce-Clarke, who had established their own charity, Crew4Change, they raised the money to buy $8,000-worth of computer and sports equipment for the village school, which had been destroyed.

Both Big Fish and Dragonfly are, as it happens, part of the fleet of superyachts managed by Y.CO, which has also been supportive of such missions. “We were 100 per cent behind the efforts of captain Mike Gregory and the fantastic crew of Dragonfly,” says its co-founder and CEO Charlie Birkett.

Y.CO has launched two philanthropic initiatives of its own. One, “oceans.eleven”, is a group of superyacht captains convened by Y.CO’s director of fleet protocol, Scott Lidbetter, a former rear admiral in the British Royal Navy, to encourage and support yachts and their crews to effect positive change. The other is a mechanism by which crew on Y.CO-managed boats can donate a day’s pay to charities engaged in relief work.

When we spoke he and two colleagues had just returned from the North Pole to which they had trekked to raise £250,000 for the Royal Marines Charitable Trust Fund and the Lewis Moody Foundation.

“We'd encourage any yacht with the capability to aid the efforts like the one in Vanuatu to contact Yacht Aid Global and help in any way they can,” Lidbetter adds. “Dragonfly's relief efforts have been an inspiration and a great example of how superyachts can effect change and make a positive impact.”

“I am incredibly proud of what we achieved,” Gregory says, as he prepares to take Dragonfly back to Vanuatu with supplies. “It was a massive team effort. The boat performed beautifully; the crew worked very hard.”

And none of it was easy. Gregory spoke of “the emotional toll of being involved in something like this. We're not used to seeing people in distress.

“We're not humanitarians, we're yacht crew. But in that we're fortunate, representing the one per cent, because there is so much good we can do. With a bit of effort you can make a huge difference.”