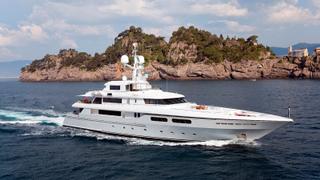 The 49.9 metre motor yacht Olmida has been listed for sale by Antoine Larricq at Fraser.

Built in high-tensile steel and aluminium by Italian yard Codecasa to an in-house design, Olmida was delivered in 2004 and most recently refitted in 2014. Her interior, by Franco and Anna Della Role, welcomes 12 guests in six cabins including a master and VIP suite on the main deck while below deck lie two double and two twin cabins. All guest cabins have entertainment centres, 27-inch Samsung LCD television screens and en suite bathroom facilities while a further five cabins sleep up to 10 crewmembers aboard this yacht for sale.

The main deck saloon has comfortable sofas and coffee tables to port and starboard with a third table and sofa against the forward half wall acting as a divider from the dining area. A special feature here is a sophisticated entertainment centre including a 50-inch LG television screen. The dining room features an oval burl top table with inlaid wood and 12 chairs, while the flooring is artistically executed with marble, inlaid onyx and carpeting.

Twin 2,200hp Caterpillar diesel engines power her to a maximum speed of 16 knots and a range of 5,000 nautical miles at her cruising speed of 12 knots.