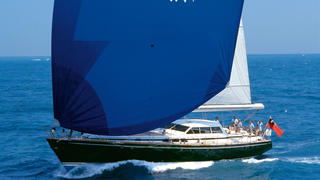 The 26.7 metre sailing yacht Sea Rose Star has been sold with dahm international representing both the seller and buyer.

Built in aluminium by Dutch yard Jongert to a design by Doug Petersen and launched in 2003 as a world-cruising yacht, Sea Rose Star is a Jongert 2700M sloop with hydraulically operated sails and rigging. Equipped with bow and stern thrusters, she is ideal for fast cruising in comfort and style.

A comfortable interior by Peter Sijm accommodates six guests in a master suite and two twin cabins, all with entertainment centres and en suite shower facilities. There is a separate crew area with quarters for three crew and she is seaworthy, luxurious and easy to handle with a small crew. A 2014 major refit included a completely remodelled cockpit and she is now in mint condition.

The cockpit - the central living area on deck - can easily be converted into a fully enclosed deck saloon. From here, one can reach the elegantly designed saloon and cabins below deck with their warm wood tones. The saloon has comfortable seating and an entertainment centre including a large screen television set and a Bose surround sound stereo system, making it ideal for relaxing during long passages.

A novel feature is the fact that her 4 metre tender is stored in a tub of its own which can be used as a pool when the yacht is at anchor or in its berth. Under power, a Scania 257hp diesel engine gives her a terrific range of 3,000 nautical miles.