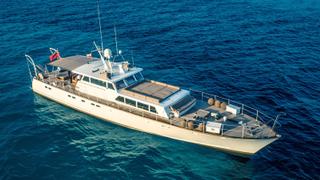 The 24.8 metre motor yacht Ciutadella has been listed for sale by Eric Trupheme at Ocean Independence.

Built in wood by French yard Chantier de l’Esterel to a design by Andre Mauric and delivered in 1967, Ciutadella was most recently refitted in 2016. All owner and guest accommodation for six are aft of the lounge area, composed of a double and a twin cabin, and a full beam master suite. Crew space for two staff on this yacht for sale is forward with the galley and has independent access from the foredeck.

During the recent refit, two new Volvo Penta D11 engines were installed, giving 100 extra horse power to the yacht and reducing her fuel consumption. The existing Kohler generator was rebuilt while another new one was installed in the middle of the yacht to reduce vibrations and noise in the owner/guest accommodation during the night. The thruster, fridges and air conditioning systems were also upgraded.

The large aft deck was efficiently updated following her refit, with a large lounge area followed by a dining corner protected by the wheelhouse. All of the aft deck is protected by a large Bimini top and this feeling of space is also apparent on the foredeck, with an outsized solarium coupled with another lounge corner. Her top speed is 23 knots and she boasts a maximum cruising range of 800 nautical miles at 18 knots with power coming from two Volvo Penta D11 diesel engines.