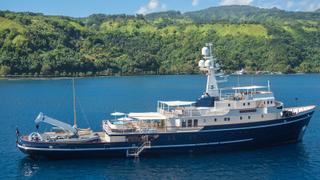 The 58.83 metre explorer yacht Seawolf, listed for sale by Jody O’Brien at Fraser, has been sold in an in-house deal with the buyer introduced by Dennis Frederiksen.

Originally built by Holland’s J&K Smit yard in 1957 as an oceangoing tug, Seawolf was converted into a superyacht by Astilleros de Palma in Mallorca from 1998 to 2004 and further upgraded and converted in 2008 and 2010. In 2016 she had a further extensive maintenance and refit period, including a complete repaint and main engine rebuild, so that she is now ready to cruise anywhere in the world.

An ice strengthened hull and superior seakeeping qualities combine to produce a versatile go-anywhere luxury yacht, compliant with the most recent safety and technological standards.

Accommodation is for up to 13 guests in five well appointed cabins, including the privacy of a separate owners deck with a full beam cabin, office/study and pantry. Other guest cabins are configured as a VIP suite, a double and two twins and all cabins have entertainment centres, Samsung television screens and en suite bathroom facilities. A popular charter yacht, Seawolf is as much at home in the Western Mediterranean as the Southern Ocean.

Subscribe to BOAT Pro to access brokerage sales data and unlimited specs for 12,155 yachts in our Superyacht Directory – the world’s most comprehensive superyacht data.