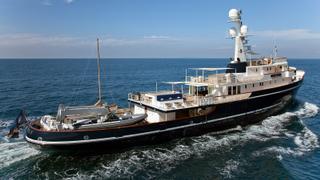 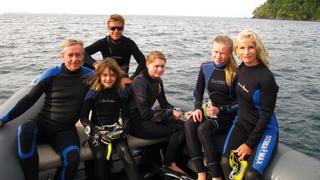 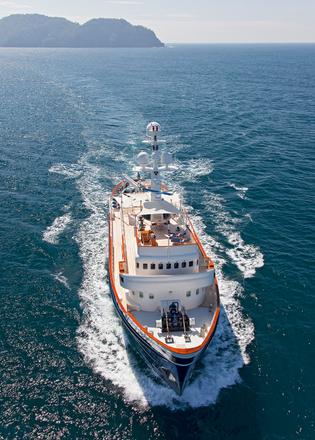 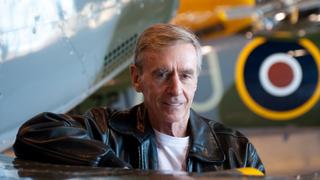 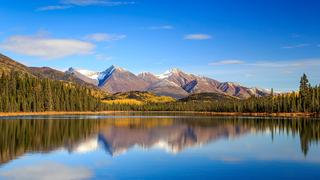 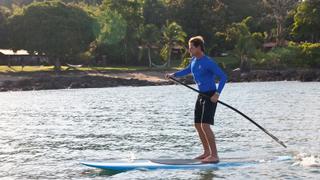 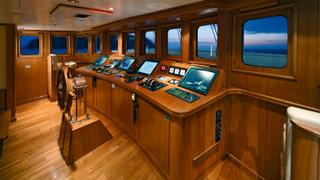 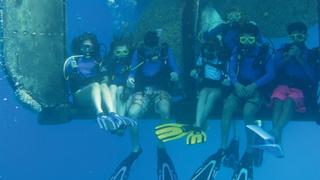 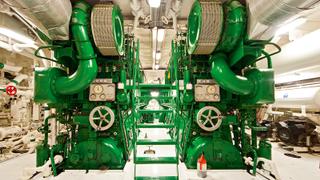 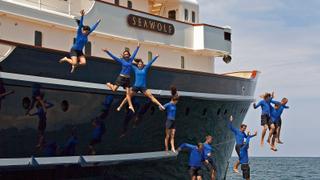 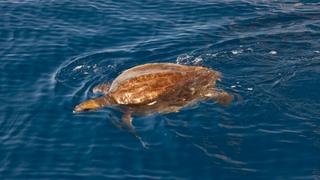 On board with Mike Potter, Owner of 58m Superyacht Seawolf

Superyacht owner Mike Potter had made his fortune by the age of 51 – and that’s when the fun really started, with sailing, diving, vintage planes and family getting his full attention. Cécile Gauert catches up with the high-flying Canadian...

Mike Potter is trim and fit at 74 and as comfortable in a flight suit as in a wetsuit. The owner of 58.8 metre explorer Seawolf is an honorary colonel in the Royal Canadian Air Force and displays a very Canadian modesty about his accomplishments.

When I ask him about his background, he paints a quick portrait. “I was in the software business. I was very fortunate that it did well and I was comfortable bringing in professional management. It was a fair size by the time I did, so that allowed me to retire in the sense that I didn’t have to go to the office every day.”

Business articles tell the story differently. Potter forged a reputation as a trailblazer in the tech world, which earned him a lifetime achievement award from the Ottawa business community in 2016. He studied mathematics and physics, earned a master’s degree at the University of British Columbia and served with the Royal Canadian Navy.

He joined Quasar Systems in 1972 when he was 28. Two years later, he bought the company and renamed it Cognos. He took it public in 1986, following the success of the PowerHouse programming language that earned the company international renown. The largest computer software company in Canada, it employed 1,100 people worldwide by the early 1990s, and in 1995 Potter stepped aside. In 2007, IBM acquired what was now a major developer of business intelligence software for $4.9 billion.

He had been all in from the day he started and then, at 51, as the company was thriving, he decided to step aside, a move he was comfortable to make but which surprised some. He recalls telling a journalist who asked why he’d left such a successful company: “What’s the alternative? Is it better to step down when things are not going well?” He had decided it was time for him to do other things, explore his passions for sailing and flying and to raise a family. He did not retire exactly, but he had a lot more time to pursue personal interests, and a well-run family office allowed him to roam far and wide – “actually they encourage it”, he says.

An avid pilot since his early twenties, he started acquiring a collection of vintage aeroplanes in 2000 and in 2003 formed a non-profit organisation called Vintage Wings of Canada, which showcases restored aircraft at air shows and in a small museum.

“It’s an aspect of my life that has received a bit of attention in the community,” he says. “I have a collection of antique airplanes, mainly Second World War fighters, many flown by Canadians. We have British and American airplanes: Spitfire, Hurricane, Mustang, Kittyhawk, Corsair, and some even more rare examples from the 1930s and 1940s, plus a carbon-fibre aerobatic airplane and a 1950s era Canadian bush plane.” He has flown everything from gliders to a Dassault Falcon 200.

“I find sailors and pilots are often people who have the same interests,” he says. And he does love sailing. “I really grew up on the water. I was born in England, actually. My family moved to Canada when I was seven but I still remember living in a town called Southend right on the Thames Estuary. We bounced around with my family when we came to Canada, but we settled in Victoria on Vancouver Island. I grew up there and started sailing, and then I joined the Navy and went through military college.”

Eventually, he tapped naval architect Bill Langan, a yacht designer with Sparkman & Stephens, to create a custom 29 metre sailing yacht, which they built at Vitters. He kept that yacht for 10 years, sailing with his family throughout Europe, in the Mediterranean, the Baltic and around the UK, and in North America on both coasts as far north as Alaska.

Having a chance to spend time with his three growing daughters and exploring the world is what got the sailor into a motor yacht. He bought Seawolf, a converted ocean-going tug with its original 1956 engines, in 2008.

“What motivated me to do it really was my kids, who were four, nine and 11 at the time. I wanted several things that I wasn’t getting in a small sailboat. I wanted a little more space, so the kids could bring their friends, and I wanted to have the ability to carry equipment – toys, they call them. I wanted to carry things that could allow us to have activities aside from sailing. And I wanted the ability to go anywhere in the world. I wanted to discover the planet; not go just to the Caribbean and the Med.”

A broker brought to his attention a converted tug named Dolce Far Niente. Potter had started to think about trading his sailing yacht for a more modern explorer yacht, but when he saw the tug, as he says, “I fell in love with it”. It was more boat than he was intending to build, but he envisioned all that he could do with that deck space and range. The boat was built to go in any kind of weather, but it was more than a tough boat. It had a lovely aura of a bygone age.

The first time the tug caught the attention of the yachting world at large was at the 2002 Monaco Yacht Show, midway through a conversion carried out at Astilleros de Mallorca by a previous owner. The tug, built in the Netherlands and launched in 1957 as Clyde for L Smit & Co, was known for several feats of strength, including simultaneously towing two aircraft carriers and pulling supertankers through typhoons. But beyond that, it was a very good-looking boat, even before the conversion that brought it closer to yacht standards.

“She’s beautiful,” says Potter. “Although she was originally built in the 1950s as a commercial boat, I think the naval architect at the time made some effort to build a ship with beautiful lines. Then the conversion was done by somebody who was sensitive to that and kept those beautiful lines, so I liked that,” he says. “And it has a huge boat deck for storage. I put an 8.5 metre sailboat [a classic Herreshoff replica] on it and an 8.8 metre tender, which we use a lot for diving, plus I have a rowboat with a sliding seat, several kayaks and paddleboards, jet skis and most of all we have a massive amount of diving gear. We have a Nitrox system, we have a hyperbaric barometric chamber for emergencies, which I hope we never have to use, and enough equipment to put a dozen people of any size or skill level in the water at the same time.”

He still dives frequently and it’s a passion he now shares with his children. “I think that Seawolf has really made them divers more than sailors, but that’s OK. They like the water. That’s the most important thing,” he says.

Potter and the crew have a real bond with the boat and enjoy its history. The big six-cylinder Smit-MAN engines painted green chug steadily, watched over by an attentive engineer and are a sight to behold. The steady sound they make as the boat moves from anchorage to anchorage at night is as soothing as a lullaby.

The past is alive in the beautifully updated interior. A historically accurate model of Clyde is on board to remind all who sail in her of the ship’s past. It was a gift to Potter from his partner, Diane Cramphin, a designer who worked in secret with Seawolf ’s first officer to find it. She surprised him with it, and he loves to look at all its accurate details.

In August 2013, Potter helped organise an encounter in the Netherlands with the tug’s sistership Elbe. Like Seawolf, she’s had many lives, serving for a time as a support ship for Greenpeace, and now she’s a floating museum. The encounter took place in the boats’ original port of Maassluis, near Rotterdam, and the event attracted a crowd of enthusiasts and former Smit employees and their families. “We were surrounded by thousands of local people, many of whom went back a couple of generations, who were building and operating these tugs in the 1950s,” Potter says. In the crowd, tears in his eyes, was the son of the boat’s original designer, JCA Hoogenbosch.

This is very meaningful to Potter, who makes sure the boat is in tip-top shape. “Eventually this boat will have a new life with another family,” he says.

Having the boat has “given me a fantastic lifestyle being around family and friends. They say I am an active owner. I’ve done typically 80 days a year. I will probably do more than 100 days this year, but I’d live on it if I could.”

He doesn’t because he still has obligations shoreside and this allows Seawolf occasionally to be available for charter. The knowledgeable crew includes a marine biologist. Recently, Seawolf has cruised the Pacific from French Polynesia, to Fiji, Bali and the Philippines.

In spite of his attachment to Seawolf, with his children growing up and becoming independent, he thought he might have fewer opportunities to spend time with them, so a few months ago he put the boat on the market. However, shortly after we discussed his plans to get back into sailing, he took another trip aboard Seawolf to the Solomon Islands. During the voyage, he decided to withdraw it from sale. He told his broker he was simply having too much fun. “Seawolf allows us to do so many different activities and keep hyperactive on every trip on board,” he says.“I love this boat."

On Board 60m Constance with Owner Alan Dabbiere