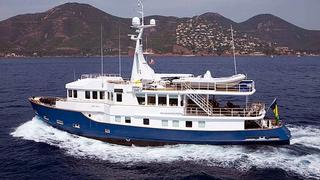 MCA compliant and Bureau Veritas classed, Alter Ego (ex-Bulldog) was delivered in 1991 by WGB Werft Berlin and had a major refit in 2011. She was originally built as a tug but was converted into a superyacht in 2001 by CMN in Cherbourg. She boasts an interior design by Jean Pierre Paquet, accommodating 12 guests in five cabins, along with two Pullman berths.