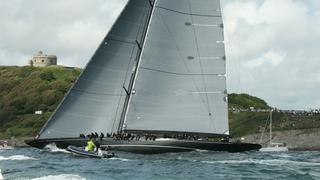 Yesterday’s race at the J Class regatta in Falmouth was very close, with never more than three minutes separating the first and last boats and, after a slightly processional first round, there were frequent place changes.

In a south-westerly force four, Rainbow established a small lead early on and effectively kept the other boats pinned on the left side of the course. They all tacked late and overstood the windward mark where Rainbow was closely followed by Velsheda, Ranger and Lionheart.

The wind backed soon after that. 'The run became just a long starboard reach with no gybing,' says Ranger’s helmsman Earle Williams. 'It would have been nice to have a VMG run.' Thick fog enveloped the boats as they approached the leeward mark in the same order, but Rainbow’s wide rounding allowed Velsheda to slip inside her and take the lead which she held to the finish.

For the first part of the second beat it was hard to see who was where, but when the visibility improved it became apparent that Ranger had overtaken Rainbow. After exchanging a few tacks with Rainbow, Lionheart then sailed in towards Falmouth while the others went left. 'We wanted to have the right side of the course,' says Bouewe Bekking, Lionheart’s tactician, 'so we were glad that Rainbow didn’t tack on us anymore and let us have it.' It proved to be a good move as when the boats converged at the top mark, Lionheart not only crossed Rainbow but was very close to Ranger.

There were no further place changes on the broad reach to a mark off St Anthony’s lighthouse or on the fetch to the finish off Pendennis Point, but by now the sun was shining and the crowds on the headlands were at last able to witness the wonderful spectacle they had been waiting for.

Velsheda and Ranger have been racing against each other for the past decade and it’s good to see the two newer boats getting so close to them. 'We don’t know the boat at all and these other guys have been sailing them forever,' says Bekking. 'Hats off to our owner as it’s his first really big regatta steering the boat so he’s doing very nicely.'

'These two new crews are doing really well as they are not easy boats to sail,' adds Williams, 'They are on a fairly fast learning curve.'

Following her successful protest on Tuesday regarding the positioning of a mark, the redress given to Lionheart is that she has been placed third in that race, equal to Rainbow.