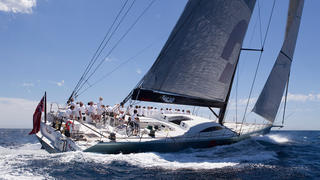 The 33 metre sailing yacht Leopard 3, jointly listed for sale at Bernard Gallay Yacht Brokerage and Berthon Boat Company, has been sold with the buyer introduced by Roman Kovalev at Moran Yacht & Ship.

Built in GRP by Australian yard McConaghy Boats to a design by Farr Yacht Design, Leopard 3 was delivered in 2007 as a high-performance yacht. A full refit in 2012 saw her gain three en-suite double cabins and two singles, accommodating eight guests.

She is arguably the most high profile racer cruiser yacht in existence, and has a trophy cabinet groaning with silverware, having taken first place at the 2016 Rolex Maxi Cup and the Voiles de St Tropez, among a host of regattas and races worldwide.

The concept behind her was to create a yacht with a radical dual purpose: high performance for racing with a canting keel and twin dagger boards, combined with excellent internal volume, accessories and amenities to meet the demands of the top-end charter market. Thus Leopard 3 has no need to concern itself with the vagaries of the Caribbean and Mediterranean charter seasons. Instead, the owner focuses on chartering her to keen sailors and corporate clients wanting to enjoy high-performance sailing, and she generates a steady income year-round.

She is capable of speeds in excess of 35 knots under sail, while a 230hp Yanmar diesel engine gives her a cruising speed of 10.5 knots under power.