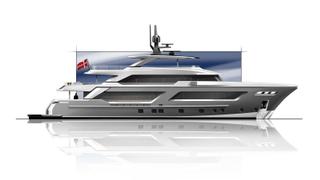 A new 40 metre explorer yacht has been sold by Italian yard Cantiere delle Marche to a European client with the buyer introduced by Richard Higgins at Camper & Nicholsons International.

The new yacht is currently named Project MG 129 and will be constructed in steel and aluminium to a design by Francesco Paszkowski with naval architecture by Hydro Tec. Accommodation is configured for 12 guests in five en suite cabins while a further four cabins will sleep up to seven crewmembers. Although detailed technical specifications have not been released, her twin 16V 2000 MT2 MTU diesel engines will power her to a maximum speed of 14.5 knots and a range of 5,000 nautical miles at nine knots.

“It is a great pleasure to work with an owner who was keen to bring his experience to CdM,” says Vasco Buonpensiere, the yard’s co-founder and marketing director. “By deciding to have his new yacht built by CdM he has offered a serious statement of trust in our yard's reliability and construction quality.”

Fabio Ermetto, Chief Commercial Officer of Camper & Nicholsons adds, “It has been a great experience to represent an experienced yacht owner with a clear vision of his next yacht and at the same time having the CdM team with a very professional and client oriented approach, always able to translate such a vision.”

The asking price of Project MG 129 has been withheld.