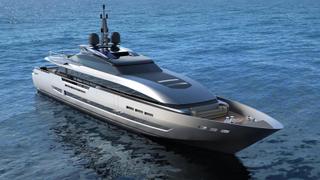 A new-build 43 metre motor yacht has been listed for sale by Jeremy Comport at Ocean Independence.

Currently being built in aluminium by Italian yard Baglietto to a design by Francesco Paszkowkski and called the Baglietto Fast HT, delivery is scheduled for 2020, with the hull now complete. The restyled exterior of this all-aluminium yacht builds on the success of the Baglietto 46M Fast yacht Lucky Me and its characteristic lowered bulwarks. Other enhancements include larger windows and significantly increased interior volumes, while the new hardtop adds a shaded area to the sun deck.

Meanwhile, the interior has been reworked in collaboration with Margherita Casprini, with liberal use of beige and brown tones to emphasise the contemporary atmosphere on board. Accommodation is for up to ten guests split between five staterooms, including a master suite, two VIP suites and two twins with Pullman berths, while the crew quarters allow for a staff of up to seven people aboard this yacht for sale.

Michele Gavino, CEO of Baglietto, comments: “The 43M Fast is a yacht that has played a crucial role in Baglietto’s history and this restyling makes it even more attractive for those who love Baglietto’s distinctive high-performing style.”

This high performance is delivered via a pair of MTU 12V4000 M93L diesel engines that allow for a maximum speed of 28 knots and comfortable cruising at 25 knots, while the total fuel capacity of 41,000 litres means a range of 700 nautical miles.