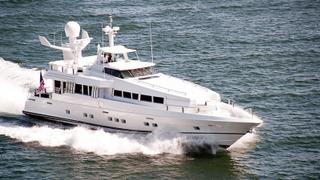 The 31 metre motor yacht AP has had a central agency change and is now listed for sale by Kit Denison at Denison Yachting.

Formerly known as Gazelle, she was built with an aluminium hull and composite superstructure by Australian yard Oceanfast to a design by Phil Curran and delivered in 1989 with a full refit in 2012 when AP was repowered with new engines. Her interior, by the late Jon Bannenberg, features a relaxing decor in shades of white and light blue accommodating six guests in three cabins. These consist of a master suite and two twins, all with entertainment centres, Samsung television screens and en suite bathroom facilities. In addition, there are quarters for up to five crew aboard this yacht for sale.

The main saloon is dominated by a large, plush circular settee and has a bar, games table and an entertainment centre including a Denon home theatre system.

Al fresco entertaining is readily available on the aft deck and up on the flybridge which offers guests built-in upholstered bench seating, an electric grill, bar and spa tub.

A shallow draft of only one metre makes her ideal for cruising in the Bahamas and her twin MTU 12V 2000 diesel engines linked to KaMeWa water jet drives allow a cruising speed of 22 knots topping out at 27.5 knots.